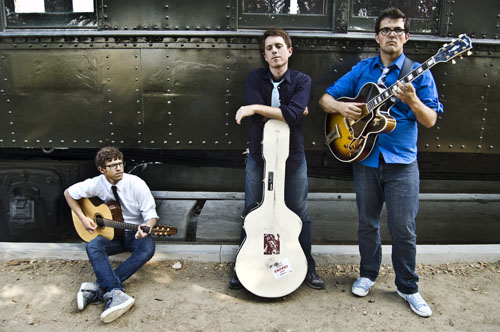 Submitted photo / The New West Guitar Group will be at EOU Oct. 16-17.

LA GRANDE, Ore. (EOU) ⎯ The New West Guitar Group from Los Angeles will be in residency at EOU next Tuesday and Wednesday to visit with classes, coach the university Jazz Combo and work one-on-one with guitar students.

With music self-described as a combination of the “foundation of jazz with elements of blues, rock and folk,” New West is comprised of Perry Smith, John Storie and Jeff Stein.

Hear the group perform at 8 p.m. Oct. 16 at Joe Beans Coffee. Admission is free for EOU students and there is a suggested donation of $5 per person for general admission.

Storie grew up in Pendleton, where New West has made previous appearances at the Pendleton Center for the Arts. Their latest album “Round Trip Ticket” was released in Oct. 2011 and has received positive reviews, including one from Downbeat Magazine which writes, “…it’s an open spaces, sunlight-dappled record that feels like it was recorded in plain air with three musicians surrounded by redwood.”

New West keeps a full touring schedule – domestically and internationally. In 2005 they performed for the World Exposition in Nagoya, Japan and two years later took the stage at the German American Volksfest in Berlin. New West continues to perform in major venues throughout the U.S. and Canada, Europe and Asia, and in 2009 they were the opening act for Diana Krall at the Britt Festival in southern Oregon.

Support for New West’s residency at EOU comes from visiting artist fees and Eastern Student Entertainment. For more on the group, including videos and audio, visit newwestguitar.com.