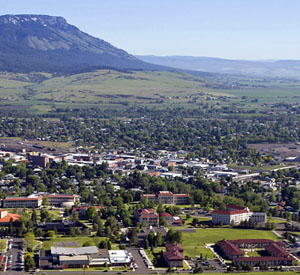 LA GRANDE, Ore. (EOU) – Eastern Oregon University has added another offering to its graduate programs. The State Board of Higher Education approved earlier this month a new low-residency master of fine arts degree in creative writing.

The decision came as welcome news to David Axelrod and Jodi Varon, longtime EOU faculty who proposed the program a little over a year ago.

“We have been kicking around this idea for an MFA for at least 20 years,” said Varon, professor of English and writing.

Varon and Axelrod are co-directors of the newly approval academic program. The two sat down recently for a wide-ranging conversation about the MFA.

“We came at this idea from every angle over the years, but could never figure how to make it pencil out,” Varon said.

Then, late in the summer of 2011, James Crew, associate editor at “basalt,” EOU’s literary and fine arts magazine, suggested the low-residency model. That proved to be the crucial moment, Axelrod explained.

“It wasn’t so much that we hadn’t considered this model in the past, but this time it was eagerly promoted to us by a young writer who saw EOU and the Grande Ronde Valley as an ideal place where people would want to come to study literary arts,” Axelrod said.

Others at the university shared Crews’ early enthusiasm for the low-residency program, including Steve Adkison, provost and senior vice president for Academic Affairs. Adkison ultimately guided Axelrod and Varon through the complicated process of approving a new graduate program.

“Steve’s support and advice proved invaluable from the start,” Axelrod said. “He helped shape the language of our proposal and its timing. He’s read the tea leaves pretty brilliantly. Generous help and input of others at EOU and in the community has also been very gratifying and fills us with hope that the program will be a success.”

“More than anything else, though,” Varon added, “it was the continued interest the program generated among younger artists and writers around the region who made it clear that La Grande was a place that was an attractive setting.”

When native Northwest musician Laura Gibson came to town touring her album “La Grande” and its title song, Axelrod said it helped substantiate what they had been hearing.

“We’ve always thought that La Grande was one of the truly last best places in the American West,” Axelrod said. “When Gibson’s album came out, well, that was just gravy. We had the additional confirmation that ‘The Big’ is cool.”

The format of the new MFA, which Varon and Axelrod explain is quite different from ordinary in-residence education, is what makes the program unique. It allows students who may have families or jobs an educational alternative that is very flexible.

Students will complete two intensive 14-day residencies every year at EOU’s main campus, one occurring in June and the other in January. During the residencies, students enroll in writing workshops, genre seminars, service learning courses, and in the near future, courses that will focus on professional editing, publishing and marketing of books.

Also during the residencies, the program will sponsor a series of lectures and readings by well-known visiting writers, editors, publishers and agents.

Students will work closely with faculty members who are well-known and successful writers from around the United States and have agreed to join the program as mentors. They include Ars Poetica visiting writers, as well as EOU faculty and popular writers from the region. During the non-residency periods, students and faculty will continue to work together to hone writing and theses at a distance.

The first cohort will study fiction with Barry Kitterman and Jon Raymond; non-fiction with Varon and Lidia Yuknavitch; and poetry with Axelrod and Christopher Howell. Also on board are Susan Denning, who will direct the student service learning projects, and publisher-in-residence Christine Holbert, of the award-winning Lost Horse Press.

Applications will be accepted beginning Nov. 1, with coursework at the first residency launching in June 2013.

Already, the co-directors have been fielding inquiries from writers and students from around the country and are eager to begin planning future programs.

“We are now starting to contact possible visiting writers for the first two residencies and we are working closely with a number of different people to develop the resources we have here that are unique,” Axelrod said.

By 2014, Axelrod said they hope to begin offering additional program emphases in professional publishing and editing, as well as a wilderness writing institute.

“Should we actually implement all of these pieces, David and I will have finally accomplished what we set out to 25 years ago when we first began teaching here at EOU,” Varon added. “It’s really an exciting moment.”

For more information and to apply, visit eou.edu/mfa.