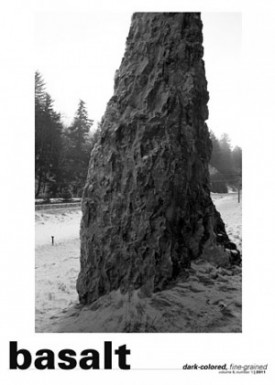 The new issue of "basalt" features the first English translation of a memoir by former Swedish Nobel Laureate, Harry Martinson.

The new issue features the 2011 Bunchgrass Poetry Prize winner, Stacy Heiney, whose poem “The Breaking Around Us Is Huge,” is the first recipient of the $500 annual award from “basalt.”

Also featured is photography by the well-known Oregon photographer Terry Toedtemeier, who was the long-time photography curator at the Portland Art Museum, and co-edited the popular volume, “Wild Beauty,” which collected a century of historical photography of the Columbia Gorge. The Toedtemeier portfolio includes a memoir about the photographer by renowned eastern Oregon artist, James Lavadour.

Other works featured in this issue are by many writers well-known to readers around the country, as well as translations from Portuguese and Italian.

The “basalt” editors are particularly pleased to make available for the first time the English translation from Swedish of a memoir by former Nobel Laureate, Harry Martinson.

“The Martinson piece is fascinating,” said Jodi Varon, “basalt” editor. “As a young man, he signed on as a sailor and travelled all over the world in the period just following the First World War.”

“Particularly compelling is Martinson’s memories of working in Belgium, literally shoveling spent shell casing out of farmers’ ditches in Flanders,” added David Axelrod, Varon’s fellow editor. “It’s one of those rare, odd glimpses of the enormity and costs of war.”

Varon and Axelrod are both professors of English and writing at EOU. Ben Mitchell, senior curator of art at the Northwest Museum of Arts & Culture in Spokane, and James Crews, recent writer-in-residence at the Kimmel Harding Nelson Center for the Arts and Caldera Arts in Sisters, are also editors of the publication.

In addition to the print edition of “basalt,” readers can find news, reviews and articles at basaltmagazine.com. Copies of the print version are available for $10 through the website and at local bookstores. The publication is sponsored in part by the EOU Foundation.

« Alumni Artists Exhibition | Choirs of the Valley kicks off homecoming »