Eastern Oregon University > Faculty > Inside the new issue of basalt

Inside the new issue of basalt 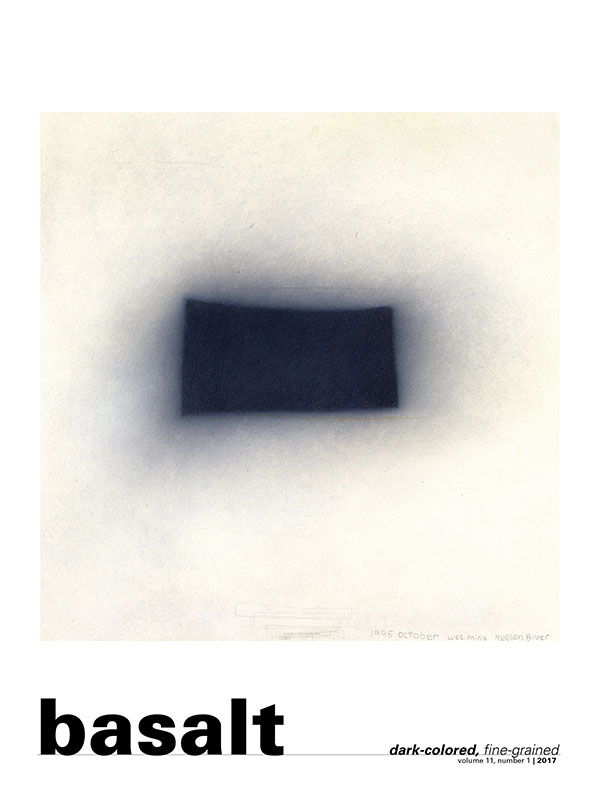 Artwork by Wes Mills is featured on the cover of the new 2017 issue of basalt available now.

LA GRANDE, Ore. April 17, 2017 – An array of local, national and international writers and artists are featured in the latest edition of Eastern Oregon University’s award-winning magazine, basalt: a journal of fine and literary arts.

Anchoring the new issue is its opening piece, “A Forest of Names,” by northwest artist and writer Ian Boyden.

Boyden curated an exhibition by the influential Chinese artist Ai Weiwei that included all the names of the 5,196 Chinese children who were killed in the 2008 Sichuan Earthquake. The schools these children attended were poorly constructed, and as a consequence, collapsed during the quake. The Chinese government suppressed the facts about who died, how many and why. Even the parents were denied access to information about their children’s fate.

Ai Weiwei, who is considered among the most influential artists in the world and is followed by millions on Twitter, uses the platform to share the names of these children on their birthdays. Because of his dissent against the Chinese government, he can no longer live in China and currently resides in Berlin.

Boyden began translating into English the names of the children who died and then wrote brief meditations on the meanings of their names, which he also tweets out each day.

“Ai Weiwei sees our world as profoundly lacking in empathy,” Boyden said. “For me, the empathetic demand is the great gift of his work to our culture.”

Ai Weiwei has a small connection to EOU. When he was a boy, George Venn, professor emeritus, visited his family in China and translated some of the poetry of Ai’s father, Ai Quing. The translations are available in Venn’s award-winning collection, “Marking the Magic Circle.”

David Axelrod, assistant editor for basalt, draws another connection between eastern Oregon and the visual artist featured in this issue, Wes Mills.

“Mills is a highly regarded artist who grew up in Spray and attended public school in Monument in Grant County,” Axelrod explained. “His work is widely praised for its subtle intelligence, nuance and spare beauty.”

Mills’ portfolio is introduced by his friend and EOU graduate Robert Stubblefield and is accompanied by a memoir about the artist by Kerri Rosenstein, visiting professor of art at EOU.

In yet another unlikely connection to the university, Mills was a close associate of the legendary minimalist painter Agnes Martin, whose work hangs in major museum collections around the world and taught briefly at EOU in the 1950s.

“This issue has been long in the making, but we are very pleased with the results,” Axelrod said. “The writing and writers featured are diverse and of the highest caliber. Some are new to the magazine like Heather Swan, Sam Roxas-Chua, Ryan Scariano, Sandra McPherson, Theresa Hamman and Emily Randell. Others though, like Thomas Madden and Christopher Howell, will be familiar to our readers.”

Copies of the new issue are available at Looking Glass Books or from the editors for $15. Inquiries may be directed to Axelrod at daxelrod@eou.edu.

The master’s of fine arts in creative writing program at EOU, subscriptions and major gifts to the EOU Foundation support the publication of basalt.

« Board of Trustees votes on tuition | ¡CONÈCTATE! at EOU »