Eastern Oregon University > Events > “They Are Not Forgotten”

“They Are Not Forgotten” 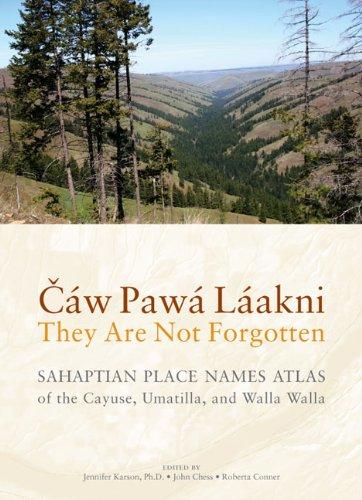 Over 600 place names are included in this ethnogeographic atlas spanning the Columbia River and its tributaries.

LA GRANDE, Ore. (EOU) – A book signing with the authors and contributors to a new ethnogeographic atlas of Native place names will be held from 5-7 p.m. Thursday, Feb. 25 in Pierce Library at Eastern Oregon University.

“Čáw Pawá Láakni – They Are Not Forgotten” documents and describes over 600 place names of the Cayuse, Umatilla and Walla Walla homeland spanning the Columbia River and its tributaries from southeastern Washington to northeastern Oregon.

A project of the Tamástslikt Cultural Institute at the Confederated Tribes of the Umatilla Indian Reservation in association with Ecotrust, the book presents an account of interactions between a homeland and its people, drawing from the knowledge of Native and non-Native elders and scholars.

The full color detailed maps and narrative that introduces and supports these place names paint a picture of a way of life. Accounts were gathered from individuals who traveled through, lived in, and saw these places. The ethnographic, traditional and institutional knowledge was incorporated into a GIS database to produce the customized maps included in the book.

Places named in Indian languages are juxtaposed with sites that are central to the colonial period in the West, such as those described by the Lewis and Clark Expedition and those given to fur-trading posts, missions and places on the Oregon Trail.

Roberta Conner, director of the Tamástslikt Cultural Institute and vice chair of EOU’s Board of Trustees, is one of the authors. Other authors who collaborated on the project are Eugene S. Hunn, E. Thomas Morning Owl, Phillip E. Cash Cash and Jennifer Karson Engum, along with many more contributors.

“This is an important book, not only for the indigenous peoples of Northeast Oregon, but for Eastern Oregon University as well,” said Shoshoni Walker, coordinator of EOU’s Rural and Native American Program. “The preservation of American Indian culture and history lies within what is passed on to the next generation. ‘They Are Not Forgotten’ will retain the places of historical value for the Cayuse, Umatilla and Walla Walla forever.”

The book signing is free, open to the public and refreshments will be provided. Copies of “Čáw Pawá Láakni” will be available to purchase for $29.95 and the atlas has also been added to Pierce Library’s collection.