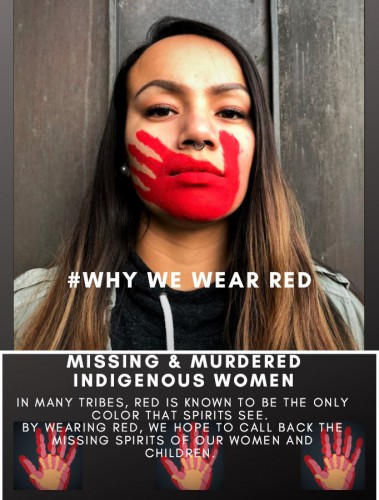 Historically, the month of November is when tribes celebrate the new hunting season.

With 54 Native American students on campus, the program works within the Office of Student Diversity and Inclusion to create a sense of belonging on campus.

“It is important they feel welcomed here, especially when they are far from home,” Harris said.

She explained that dedicated activities and gathering spaces help Native people build support groups, learn traditional skills and share information about where they came from.

At the start of the month, students visited the Tamastslikt Cultural Institute in Pendleton, the only museum on the Oregon Trail that tells the story of western expansionism from a tribal point of view. Exhibits bring to life the traditions of the Cayuse, Umatilla and Walla Walla Tribes, who have called the region home for 10,000 years, and connects their rich history to modern times.

Later in the month, students embraced their artistic sides by making beaded necklaces with local artist Sequoia Conner, attending a cultural painting night and decorating their own moccasins.

“College is a time when students find independence,” Harris said. “It is important for students on campus to learn how to make their own regalia as many do not know how because they did not get stuff handed down to them.”

The month also recognizes issues affecting students from reservations. ASEOU, Title IX, Shelter from the Storm, the Nightingale Gallery and Student Diversity and Inclusion have collaborated to raise awareness about Missing and Murdered Indigenous Women (MMIW). The groups collected and hung red dresses around campus to represent Native women who have gone missing or been murdered.

“Students claim the dresses creep them out or make them uncomfortable, which is the point,” Harris said. “We want to show them this is a real issue and show how strong of an impact it has.”

In conjunction with MMIW, the Nightingale Gallery hosted an exhibition of textiles by artist Lily Lee entitled, “The Great Basin Murders.” Lee’s collection of 3D artwork commemorates unidentified female murder victims found along roadsides from 1983 to 1997 in the American West.

“The exhibit represents where the bodies of unidentified women have been found in local places. The artist uses data regarding age, race, height and weight and transfers it into hand woven textiles. The photos show the textiles placed in the exact locations where women’s bodies have been found,” said Jan Ng, an EOU student and member of the Native American Program.

The exhibit will be up through Dec. 7 in Loso Hall.

“My purpose here is to be an advisor and advocate for my native students,” Harris said. “There have been a lot of Native women who go missing, and students are affected because it could be a family member or someone they know.”