Eastern Oregon University > Press > A bridge between EOU and NASA

A bridge between EOU and NASA

A bridge between EOU and NASA: Nyki Anderson pursues a passion for science 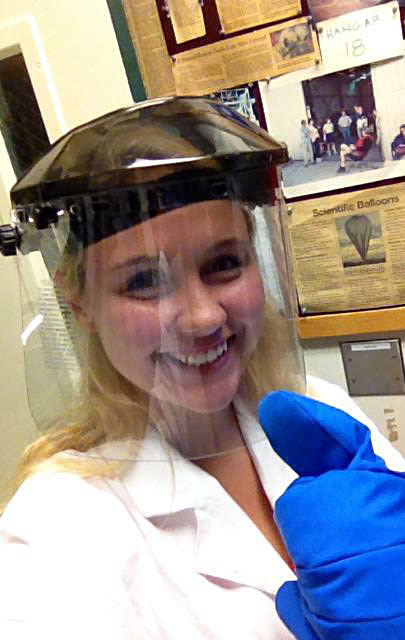 Anderson dons cryogenic safety gear prior to pouring liquid nitrogen into a pressure chamber to simulate the environment of space.

Anderson is one of the few recipients of two highly competitive scholarships making the experience possible: The John Mather Nobel Scholars award and a 4-year Institution Scholarship from the Oregon NASA Space Grant Consortium.

The National Space Grant Foundation, Inc. presents The John Mather Nobel Scholars to applicants who are passionate about science, space and astronomy. To qualify, students must be current NASA interns at the junior, senior, or graduate level and have experience speaking at professional science conferences.

The three-year award provides money to cover Anderson’s food, housing and registration for various science conferences on the latest and greatest research, which will expand her experiences in the field and improve her own presentation skills.

Anderson is attending EOU as a junior with a double major in math and science, and a minor in physics. Her passion for science continues to grow as a member of the NASA team in Greenbelt, Maryland.

“John Mather is the first and only NASA scientist to be awarded a Nobel Prize for his research that proved that the universe is expanding,” Anderson explained, “I have met Dr. Mather several times and he is truly inspirational. He is funny, humble and inquisitive.”

Anderson, born in Spanaway, Wash., appreciates receiving such a huge honor named for Mather, who works right down the hall from her and enjoys the students’ many questions about the universe.

With her math and computer science background, Anderson is specializing in programming in the microlensing field, which is comprised of only a hundred people in the world. Gravitational microlensing is a way to detect planets around very distant stars and better understand their composition and mass.

The team plays a significant role in substantiating the millions of dollars invested by the government for the WFIRST Wide-Field Infrared Survey Telescope. Through this telescope, researchers can characterize the types of stars and observe lensing events – the bending of light around huge masses. 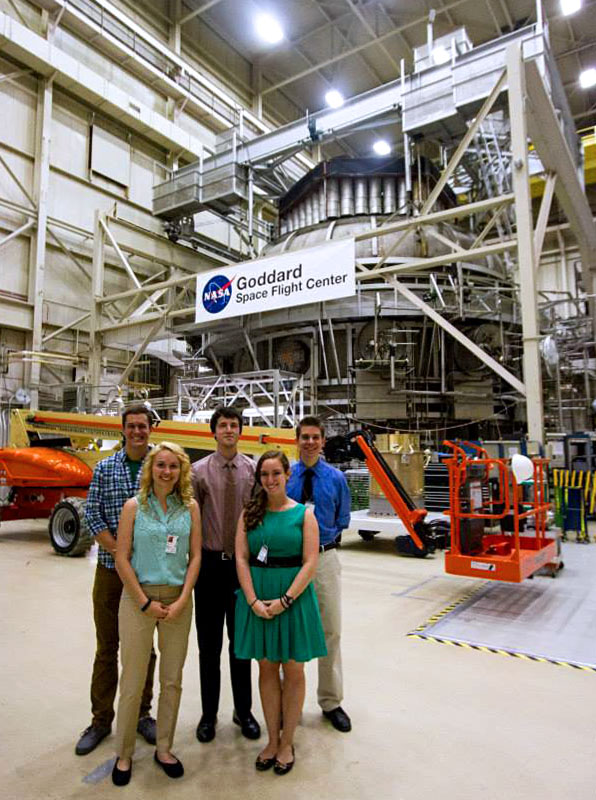 Anderson, left, poses with her teammates in front of the second biggest vacuum chamber in the country.

Anderson’s daily schedule includes coding on her computer and attending meetings with her teammates. She is also a member of NASA’s Local Organizing Committee for the 19th International Conference on Microlensing coming up in January in Annapolis, Md.

Besides Anderson’s persistent commitment, the support she received from EOU encouraged her to fulfill all of these achievements, even after she faced financial difficulty in 2012. It was her senior year in high school and her father lost his job.

“I had just been accepted to a private university and decided I wanted to go there,” Anderson explained. “When I figured out that I could no longer afford that school as a possibility, I considered community colleges and the workforce because most universities were no longer accepting applications. That is how I found EOU.”

Anderson sought hope when she applied to EOU a week before the university’s deadline.

“I called EOU everyday and the people in Financial Aid were very nice and helpful,” she recalled.

Anderson was admitted and with financial assistance of several scholarships granted through the EOU Foundation including Avista Minds in Motion, the Women in Science Award and a General Scholarship Award, her goal of attending college was realized.

She holds great respect and appreciation for her professors, particularly Amy Yielding, Anthony Tovar and Richard Croft, who were always willing to help and have had great influence on her life.

Despite being far away from campus, Anderson remains connected through the unique bridge being forged between EOU and NASA as she cultivates her enthusiasm and diligence towards science while pursuing her education.