The high-energy song and dance production features a wide range of songs from cult classics like “Time Warp” from “The Rocky Horror Picture Show,” the haunting “Hanging Tree” from the “The Hunger Games” trilogy, to music from “Portal” and other popular video games and much more.

Act one opens with the iconic “Star Wars” theme and the nearly 30 numbers to follow are all being staged and choreographed meticulously by the cast and crew.

EOU student Rachel Bentz, of John Day, is one of the people working behind the scenes as the lighting and technical designer. As a theatre major studying stage management, she is excited to be doing something a bit different for her senior project.

“I really enjoy working on the lighting,” Bentz said while thumbing through her sketches of the stage, each featuring a different color scheme reflecting her interpretation of the mood of a specific song.

“My role is to enhance the performances and help keep all aspects of the production running smoothly,” Bentz added. “It’s going to be a fantastic concert because everyone is putting 100-percent into it.”

At the helm is Peter Wordelman, professor of music and Chamber Choir director.

“The show is designed as a fun evening of entertainment for all ages, and this year’s production is fast-paced and very humorous,” Wordelman said. “We always try to include a few new ‘tricks’ so the audience will not know what to expect next.” 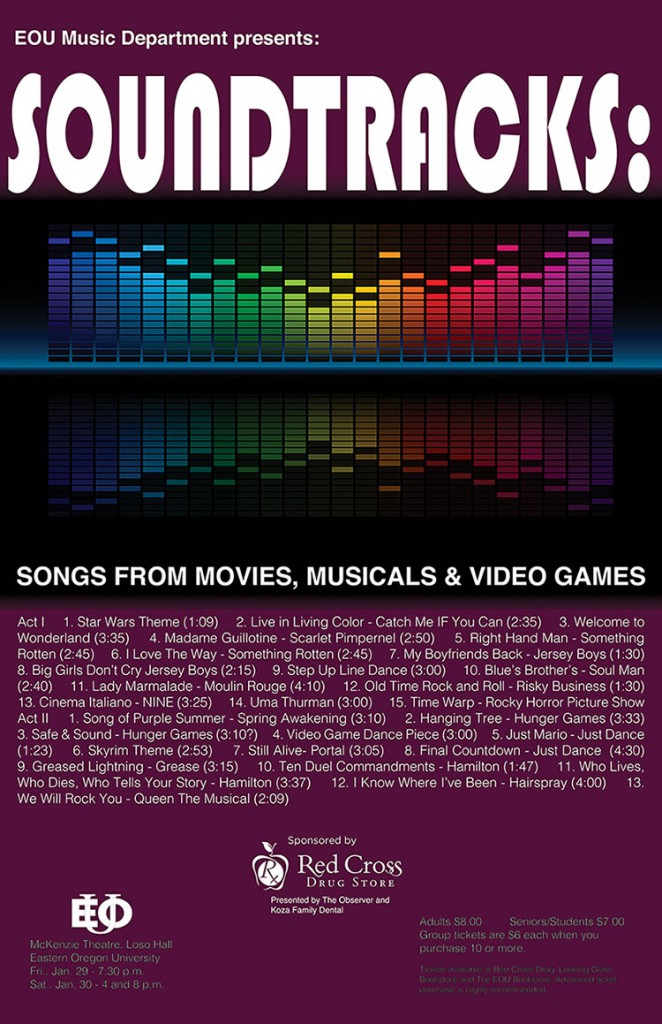 The music department has collaborated on themed concerts every winter since its “Beatles Celebration” show in 2010. EOU alumna Ariana Bloodgood, of Hood River, is returning as choreographer after working on the hit 2015 production, “Then & Now: Replay.”

This year Bloodgood is bringing the Phoenix Theatre group she directs at Hood River Valley High School to perform during the Friday night and Saturday afternoon shows. Phoenix Theatre will also give an individual performance Friday afternoon at Greenwood Elementary School.

Tickets are $8 for adults, $7 for students and seniors, or $6 for groups of 10 or more. Purchase at Red Cross Drug Store, Looking Glass Books and the EOU Bookstore.