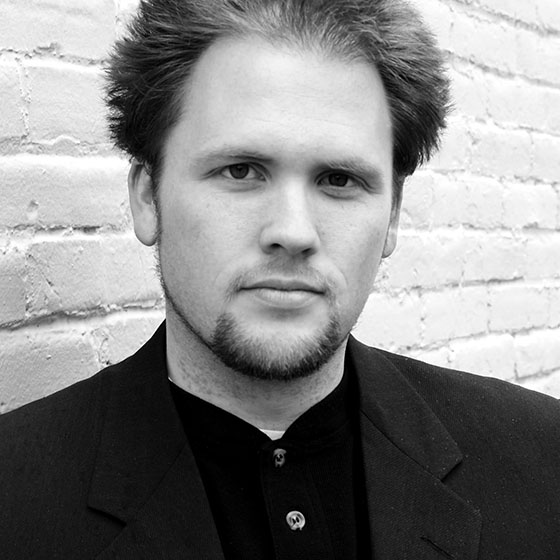 Jesse Jones, a 2005 EOU graduate, begins a new position this fall as an assistant professor of composition at the famed Oberlin Conservatory.

OBERLIN, Ohio August 5, 2016 – Music was always a passion for Jesse Jones. He began playing piano at around 6 years old, his mother serving as his first teacher.

“I didn’t like the piano at first, but it eventually started consuming all my thoughts. I really took off as I got older,” he said.

For much of his youth, Jones was home-schooled, allowing him to log many practice hours. As a teenager, he won competitions and dreamed of becoming a concert pianist.

Today, Jones, a 2005 Eastern Oregon University graduate, may not be the classical pianist he envisioned, but he has nevertheless accomplished more than many musicians can imagine.

He has won several coveted fellowships and commissions from the Guggenheim Foundation, the American Academy of Arts & Letters, Aldeburgh Music, the Juilliard Quartet and the New York Philharmonic.

Most recently, Jones was named assistant professor of composition at the famed Oberlin Conservatory, in Ohio.

“At Eastern, when I decided to become a composer, I had these lofty dreams for my career, one of which was to teach at a prestigious university,” Jones said. “Joining the faculty at Oberlin is very much the fulfillment of a life goal.”

Jones moved to the Grande Ronde Valley from New Mexico when he was in high school. He hadn’t been in school too long when he broke his arm, a traumatic event that changed his career trajectory away from piano and toward composition.

“When the cast came off, it became apparent that my bone hadn’t set correctly. It was difficult to play,” he said. “I floundered for awhile until I found something that could replace piano.”

Jones picked up mandolin and guitar, opening him up to a different style of music: bluegrass.

After high school graduation, he wanted to stay nearby and opted to enroll in Eastern’s music program, where he flourished.

“EOU was the best place I could have gone to get the education I needed as a composer,” Jones said, noting that the small department allowed him to participate in a number of diverse groups including choir, orchestra, jazz, African drumming and fiddle ensembles.

He also had the opportunity to teach private lessons, conduct the orchestra and to direct EOU’s production of “Fiddler on the Roof.”

“Those experiences provided invaluable practical training for me as a composer,” he said. “They were all things that I probably could not have done at a larger institution, without training. I’ve always been thankful to my teachers for that.”

Jones and his EOU professors look back fondly on Jones’ ensemble String Helix, which created world-style music with eccentric beats and defied classification. John McKinnon, professor of music, noted that Jones and fellow band member Luke McKern wrote all of the music.

“(Jones) was always a positive force in our department,” said McKinnon, who was Jones’ composition instructor at Eastern. “He quickly sought out other talented students and created an ensemble that, to this day, is one of the finest groups ever to come out of Oregon.”

In 2004, String Helix appeared on a televised episode of OPB’s Oregon Art Beat, where Jones and his band talked about their passion for playing music. In that same year, the band also appeared on NPR’s nationally broadcast radio program, “A Prairie Home Companion with Garrison Keillor.”

After leaving EOU, Jones went on to get his master’s in music from the University of Oregon. He then spent about a year back in the La Grande area where he accompanied Peter Wordelman’s vocal students.

Wordelman, a music professor and longtime mentor and friend to Jones, first met Jones as a high school student in the community choir he was directing at the time. At a young age, it was apparent Jones had talent.

“I was like, ‘This guy’s going to make a great conductor.’ Little did I know,” Wordelman said.

When Jones returned after completing his master’s, Wordelman assisted him in getting his first work published, “Naye-e Sin,” based on a traditional Navajo chant. The piece involves eurhythmic movements that are directly correlated to the text and are intended to portray the narrative.

“It was nice to be able to assist with it,” Wordelman said. “It was a great year.”

Jones then went on to pursue his doctorate at Cornell University, a feat that amazed even him.

“It was overwhelming,” he said. “There were big-shot geniuses around every corner, and I felt a constant pressure to perform at a high level. I felt way out of my league, but somehow managed to get by.”

A true measure of Jones’ success came in 2012 when he was named a Rome Prize Fellow, a prestigious honor that sends those in the top of their fields to study for a year at the American Academy in Rome.

The award is a derivative of the famed Prix de Rome, an accolade that lists such great composers as Claude Debussy, Aaron Copland and Elliott Carter. Only two fellows from among hundreds of applicants are selected in the music composition category each year.

“It’s a huge deal,” Wordelman said of the prize.

Jones called his experience in Italy “life changing.” The 37-year-old said it was something he had always wanted to do at some point in his life.

“Winning the Rome Prize had long been my loftiest dream, one I was sure to never realize,” he said. “I was humbled and beyond thrilled to receive it.”

Prior to his appointment to Oberlin, Jones was on faculty at the University of Georgia. He said he is delighted to have been hired at Oberlin, an institution on par with the Juilliard School.

“It’s one of America’s best music conservatories, and I’m honored to be on faculty there,” he said. “The students are extremely intelligent, talented and curious.”

Jones said he believes working as a composer in a university environment, especially one like Oberlin, can be artistically stimulating.

“You can bounce ideas off students. You feed them and they feed you. You can change their lives and thus change your own,” he said, noting that his professors at EOU did the same for him.

Composing will remain a large part of Jones’ life as he continues working in academia. He has scored films and written chamber, orchestra and choral music. His current projects include a concerto for pianist Xak Bjerken that will premiere in St. Petersburg, Russia, and a commission to write a full-length opera in England.

Jones continues to embrace a variety of musical styles, as the mandolin remains close to his heart. He plays it in a duo with world-renowned bassist Craig Butterfield and anticipates several album releases over the next few years.

Wordelman, a graduate of Oberlin himself, noted that Jones’ music is not simple and often incorporates a “rhythmic complexity” that will match the caliber of talent available at the conservatory.

Jones, who married a La Grande native and has family nearby, said he tries to return to the area whenever possible with his wife and their four daughters.

“La Grande will always be our true home, and we get back as often as we can,” he said.

His daughters have embraced music as well, with the oldest two focused on violin and cello. Jones said he is grateful for the experiences he has been able to share with his family: traveling, hearing and creating world-class music, and living in diverse corners of the world.

“Thankfully, music is part of our house, every single day,” he said.