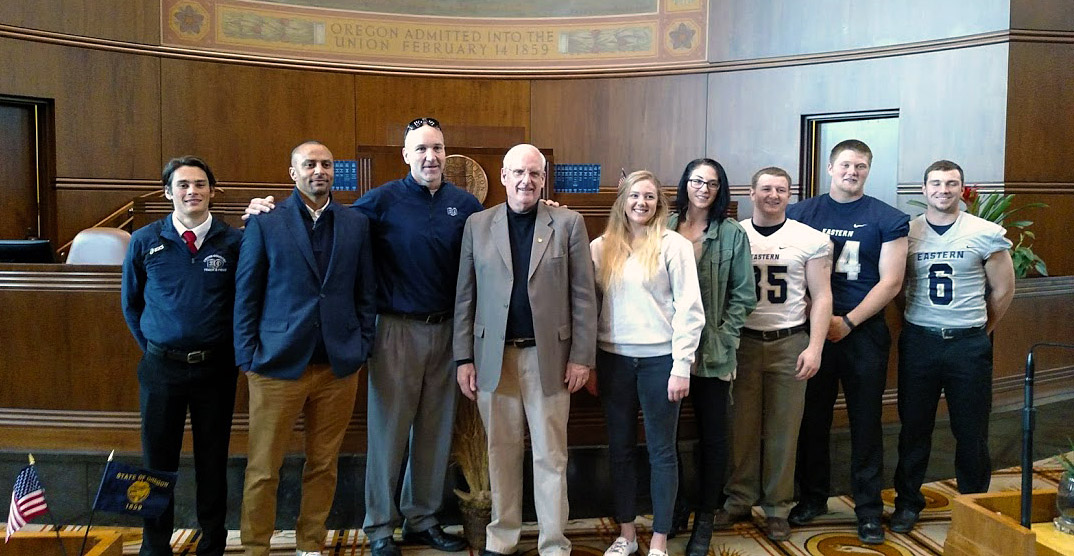 Submitted photo / Following the budget hearing with the Education Subcommittee in Salem, EOU student-athletes were treated to a discussion on the legislative process on the floor of the Senate Chamber by State Senator Bill Hansell, center, of Athena.

SALEM, Ore. April 19, 2017 – During public testimony heard Monday by the Education Subcommittee of the Oregon Joint Committee on Ways and Means, student-athletes from Eastern Oregon University took over the front row to send the legislature a message: Sports Lottery funding should be renewed in the higher education budget.

Since 1989, a percentage of the State Lottery Fund has been allocated to public universities for intercollegiate athletics, but this was eliminated from the proposed Governor’s Balanced Budget for the coming 2017-19 biennium.

Many rural, first-generation and low-income students could not attend EOU without Sports Lottery scholarships. The program also helps fund assistant coaches through the graduate assistant program, allowing EOU to work closely with rural, place-bound students who are not able to relocate, but want to further their education in a graduate program.

Freshman football player Patrick Collins, who grew up in Heppner, Ore., began by telling the subcommittee how important Sports Lottery funding is to his success.

“Because of the Oregon Sports Lottery, I am debt free,” Collins said. “I don’t have to rely on my parents to get my education, it’s just something that I’ve been able to do by myself. And it’s a great feeling to know that with the Oregon Sports Lottery behind me, I can succeed and it won’t put me at a disadvantage later in life by paying back student loans.”

Isaac Williams, head men’s basketball coach, talked about the impact of Sports Lottery on the career of EOU alumnus Jeremy Rosenabum, the Heppner High School basketball coach who trained Collins and another student who spoke at the subcommittee hearing.

“That opportunity and the funding that Jeremy received allowed him to not only better his life and his family’s life, but you also see it here in front of you with these two well-spoken young men that are here this morning,” Williams said.

Senior volleyball player Makayla Lindburg, a native of Prineville, talked about how a Sports Lottery scholarship changed the expectations about her education she had before enrolling at EOU.

“Scholarships changed my life and shaped me into the person you see today,” Lindburg said. “I was a young woman from a tiny town that no one knows about, and was told that an athletic scholarship wasn’t possible to obtain. I had no idea what my purpose was, or where I wanted to be after school. I will now proudly walk across the stage in June and receive the first college degree in my family.”

Hours after the hearing ended, the Joint Committee on Ways and Means released a revised budget proposal that maintained Sports Lottery funding 2015-2017 levels for the next biennium.

In the letter, the student leaders wrote, “We believe that no student should be priced out of a college education at Oregon’s public universities. By providing strong funding now for public universities, the legislature will be investing in Oregon’s future.  As current and former leaders of the Associated Students of Eastern Oregon University, we ask that you offer the next generation of EOU students the same opportunities that you afforded us during the past two bienniums.”