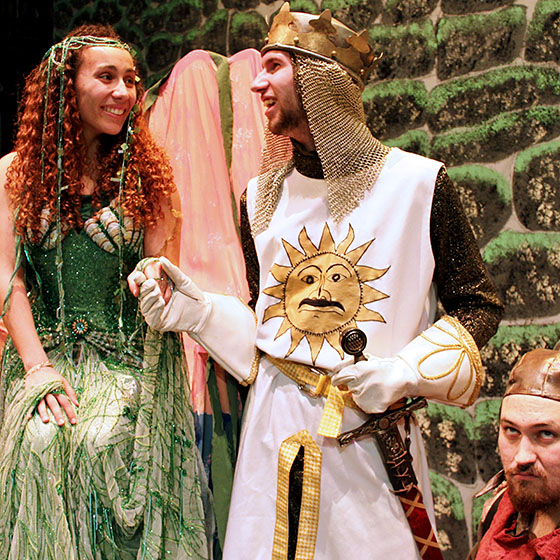 From left: Shahayla Ononaiye is the Lady of the Lake, Sam Shown is King Arthur and Griffin Fleming is Patsy in EOU’s production of “Spamalot.” The musical comedy directed by Michael Heather opens May 18 in McKenzie Theatre in Loso Hall.

LA GRANDE, Ore. May 11, 2016 – Eastern Oregon University theatre is on a quest to bring one of the great Broadway musicals of the modern age to the campus stage.

“Spamalot,” a musical comedy lovingly ripped-off from the motion picture “Monty Python and the Holy Grail,” opens Wednesday through Sunday, May 18-22 in McKenzie Theatre in Loso Hall.

This irreverent retelling of the legend of King Arthur and his Knights of the Round Table features a bevy of beautiful showgirls, cows, killer rabbits and French people. The Broadway production received a total of 14 Tony Award nominations and won three, including Best Musical.

Michael Heather, associate professor of theatre, is the production director and Candrina Nielson, a senior theatre minor, is the stage manager.

“If you love Monty Python, or just musical comedy, this is the show for you!” Heather said. “It is outrageously fun and fast-paced, making light of King Arthur and his knights, as well as Broadway itself. It has been an honor directing this cast of very talented, hard-working EOU students.”

See “Spamalot” at 7 p.m. May 18-21 and 2 p.m. May 22. Tickets are free for EOU students, $12 for general admission and $6 for senior citizens, high school students and retired or active members of the military.

For more information call the box office at 541-962-3757. To purchase tickets online go to www.ticketpeak.com/res/eou.