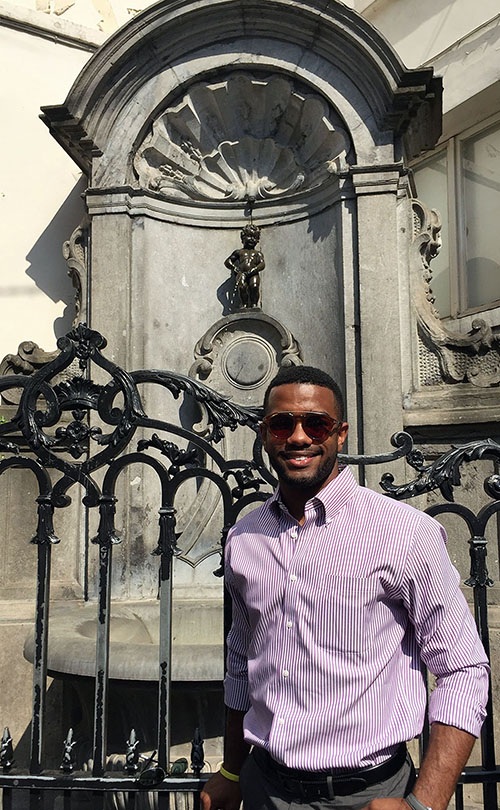 Submitted photo / Miles Loupé at the Manneken-Pis fountain in Brussels, where he met up with four Millennial Community counterparts to present a discussion at a conference on the impact millennials are making on businesses worldwide.

LA GRANDE, Ore. June 20, 2016 – When Miles Loupé enrolled at Eastern Oregon University two years ago, he knew he’d do some traveling. Travel is part of being on a college basketball team, where Loupé focuses much of his time and energy. Overseas travel, however, wasn’t part of his vision.

“I never thought two years into college I’d be able to go on a business trip to Europe,” said Loupé, originally from Las Vegas, Nev. “It’s an experience of a lifetime.”

Loupé had never been to Europe before he spent five days in Belgium in May attending the 2016 Worldcom International Public Relations conference. He was there as a member of the National Millennial Community, a collaboration of more than a dozen universities that meets weekly to participate in phone conferences with leaders from marketing, business and communication firms.

In Brussels, Loupé met up with four Millennial Community counterparts to present a discussion at the conference on the impact millennials are making on businesses worldwide. He said the group, which was the youngest at the conference and only met in person when they all arrived in Belgium, led off by sharing words they use to describe millennials.

Loupé’s word for his generation is “adaptable.” Then, the audience was invited to share terms they associate with millennials. “Lazy” and “broke” both came up.

The discussion that followed served a dual purpose: the Millennial Community hopes to dispel myths about their generation and they want businesses to understand the millennial consumer.

Much like the conference calls he’s participated in, Loupé said the panel discussion “opened up into a raw conversation” lasting an hour and a half. Because most CEOs are not millennials — generally those 19-35 years old — the group can be difficult to understand from a business perspective, Loupé said.

“We’re transforming how people do business as a generation,” he said.

EOU’s Millennial Community, which includes four students, in conjunction with the national group, hopes to help businesses with that transformation. Loupé said they help corporations understand how their products affect the millennial market, how to catch a millennial’s eye, and how to handle millennial employees, who hold different values than their older counterparts.

“Little things that click with us, they want to know about those things,” Loupé  said, noting that millennials are interested in taking on more responsibility with collaboration versus more hours.

The benefits of the Millennial Community go both ways, though.

“For the students, it’s about gaining a bigger network,” Loupé said.

As a basketball player, one of Loupé’s most memorable conference calls was with Jennifer Cabalquinto, chief financial officer for the Golden State Warriors.

“It was an incredible call. It was surreal being able to speak with her,” he said.

Because of his work with the Millennial Community, Loupé has already gotten several casual job offers — and he’s still a year away from graduating.

The Millennial Community is the brainchild of Bill Imada, founder, chairman and chief connectivity officer for IW Group who is originally from Ontario. Loupé met Imada when he visited the EOU campus last year and later got involved. Today, Loupé views Imada as a mentor with a focus on relationships who has opened countless opportunities for himself and the other three EOU students involved with the Millennial Community.

EOU students in the program have interacted with leaders from NBC Universal, Golden State Warriors, Nielsen, PBS, UPS and many more corporations, said Shari Carpenter, professor of business who also serves as an advisor to the EOU Millennial Community along with Justin Chin, director of career services.

Carpenter said EOU’s involvement with the Millennial Community has “raised the caliber” of both the students in the program as well as the university as a whole.

Before each trip or conference call, the students practice extensively and are well versed on the topic beforehand. This is especially true when students serve as co-leads on the calls, which typically include anywhere from 20 to 60 people.

“Our reputation is coming to these meetings,” Carpenter said.

When the National Millennial Community was launched, it started with just two schools, Eastern one of them. Today, the program has grown to 16 schools — among them Brandeis, Penn State, Fort Hays State University, the University of Colorado and the University of Houston — with an estimated 200 people involved.

“It really started out of business and has turned into this professional networking cadre,” Chin said. “Because of this group, students have gained access to people they would have never otherwise.”

When Loupé returned from Belgium and reported multiple casual offers, Carpenter said it was affirmation of the work they’ve been doing and the mark EOU has made.

“It’s coaching these kids toward independence,” she said. “Even more than job offers, it’s being able to hold their own in conversations with leaders of billion-dollar corporations.”

Preparing for the trips — Loupé also traveled to New York City in March with Kevin Attila, fellow Millennial Community member and MBA student – highlights the ingenuity of group. The trips are self-funded, so fundraising is often needed to help cover costs. Loupé set up a GoFundMe account to raise money for his Brussels trip.

Overall, Chin believes EOU’s place in the Millennial Group, even as the smallest school in the program, positions its students for success.

“People are seeing potential fits with our students,” he said. “It’s beautiful.”

For Loupé, the Millennial Community has taught him to embrace Imada’s model of relationship building with the two-degree rule: you’re only ever two messages or phone calls away from whoever it is you may want to connect with.

“That sits well with me,” Loupé said. “It’s a big world, but it’s easy to make those connections.”

Through connections and conversations — and some hard work on the front end — Loupé believes he and his millennial peers can find success and help shape successful businesses.

“Anywhere you go, prepare to have genuine conversations with people, and they’ll remember you,” he said.