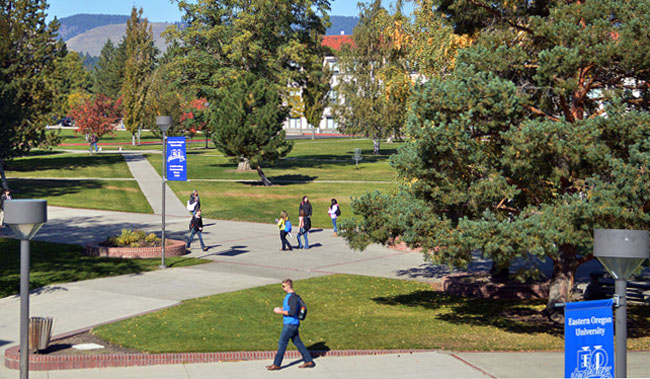 Lectures or “craft talks” begin at 11 a.m. each week in Loso Hall, Room 117 and last roughly one hour.

On June 20, novelist and memoirist Lidia Yuknavitch discusses “The Voices Within Your Voice.”

Yuknavitch is teaching at EOU in 2014-15 and has just signed a two-book deal with Harper Books to publish “The Small Backs of Children” and “The Book of Joan.” Previous works include her memoir “The Chronology of Water” and novel “Dora: A Headcase.”

Poet Jennifer Boyden rounds out week one with her lecture “Logically: The Non Sequitur’s Place in Poetry” June 21.

On June 25, novelist Scott Elliot speaks on the topic “Anything Could Happen: Openness to the Unexpected in Structure, Word and Deed.” Novelist Carter Sickels’ June 27 talk on “Place in Fiction” is the final lecture of the residency.

In addition to the craft lectures, there will be a panel from 9-10 a.m. June 18 in Loso Hall, Room 117, on the topic of “Building Community Through Arts Programming.” Susan Denning from Literary Arts will serve as moderator and panelists are Mike Midlo, program director of Fishtrap, Lyn Craig, executive director of LEO Libraries, David Memmott, publisher of WordCraft of Oregon, and Will Bowman, student director of the Ars Poetica Lecture Series at EOU.

Delivering a special guest lecture “On the History of the Book” is Nicole Howard, associate professor of history at EOU, from 9-10 a.m. June 27, also in Loso 117.

Other faculty include Jon Raymond, teaching fall and winter 2014-15. He is known for his award-winning work as a screenwriter with Todd Haynes and Kelly Reichardt, with his most recent screenwriting collaboration with Reichardt on her film, “Night Moves,” starring Jesse Eisenberg and Dakota Fanning.

Axelrod is the MFA program co-director and is teaching summer, winter and spring 2014-15. “Folly” is his latest of six collections of published poems. In addition to teaching at EOU, Axelrod directs the Ars Poetica Lecture Series and edits, along with Varon, the award-winning journal of fine and literary arts, “basalt.”

In addition to the summer and fall residencies, MFA students enrolled in a Wilderness Writing Concentration will participate in wilderness retreats and continue their creative work while exploring inner and outer landscapes intended to expand their definitions and appreciation for what is commonly called “wilderness.”

Justin Hocking is the director of the Wilderness Writing institute in 2014-15. His new memoir “The Great Floodgates of the Wonderworld” has received much acclaim. A native westerner, Hocking worked in the New York publishing industry before moving to Portland where he is the executive director of the Independent Publishing Resource Center (IPRC), a do-it-yourself publishing community in Portland.

For any interested individual with a bachelor of arts who is not admitted to the MFA program, there are still limited spots in the poetry and fiction graduate workshops taught by Howell and Sickels.

The second session of the program begins in October. Visit eou.edu/mfa for more information and a complete schedule.