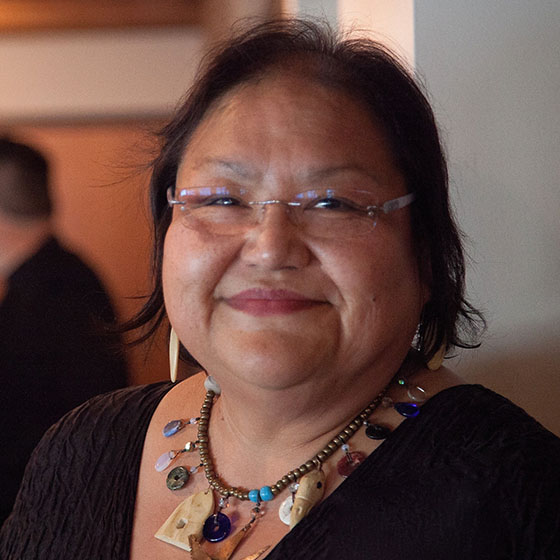 Woody, who grew up in Madras, is an enrolled member of the Confederated Tribes of Warm Springs and the author of “Luminaries of the Humble,” “Seven Hands, Seven Hearts,” and “Hand into Stone.” She is also the illustrator of “Old Shirts & New Skins” by Sherman Alexie.

Renowned for her work as a writer and artist, Woody teaches workshops and has lectured extensively. She has won numerous awards, been anthologized, translated into French and her work has also been performed as spoken word on a CD. She currently works as director of the Indigenous Leadership Program at Ecotrust of Portland, a non-profit environmental organization.

Woody received an American Book Award in 1990 for “Hand into Stone” from the Before Columbus Foundation, which was republished as “Seven Hands, Seven Hearts,” featuring drawings by Jaune Quick-To-See-Smith.

In 1993 she received a “Medicine Pathways for the Future” Fellowship/Kellogg Fellowship from the American Indian Ambassadors Program of the Americans for Indian Opportunity. She is a recipient of the William Stafford Memorial Award for Poetry from the Pacific Northwest Bookseller’s Association and was a finalist in the Oregon Book Awards in poetry.

She recently was the keynote speaker and teacher at Write in the Woods hosted by Olympic College in Shelton, Wash., and spoke at the Native Views Lecture Series of the Stott Visiting Scholars and Elders Program at the University of Montana in Missoula. She also presented for the Landscape and Belonging Origins Lecture Series at the Interstate Firehouse Cultural Center in Portland, among other venues.

Excerpt: “A Warrior And The Glass Prisoners” from “Seven Hands, Seven Hearts”

I wander down the road at night.
Being called
I hear Celilo
singing under the dam waters.
I-84 is the coldest snake ever walked on.
Its eyes stop for me.
I crawl into each jaw
and shudder down the flat back
of the freeway.

Woody’s visit is held in conjunction with the fall residency of EOU’s master of fine arts in creative writing program. For more information on other upcoming readings and events, visit eou.edu/mfa and click “Fall Residency Schedule October 2016.”