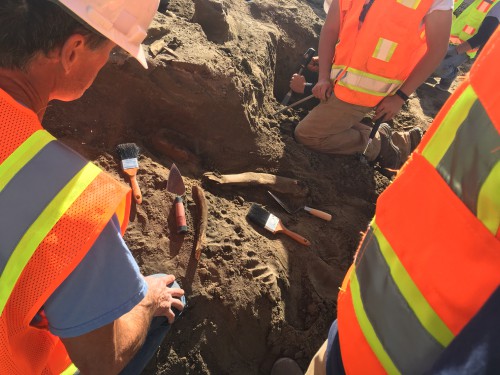 EOU alumnus Craig Woodward owned the quarry, and immediately reached out to his alma mater. Woodward passed away shortly after construction workers uncovered the fossils, but members of his family carried his enthusiasm forward. They worked with university leaders and faculty to make Craig’s final donation official with a memorandum of understanding.

Workers from Knife River Corporation had leased the land to extract sand and gravel, when they uncovered tusks about 30 feet below the surface.

Months later, they worked alongside EOU students and faculty members from the anthropology and biology departments to carefully remove the bones. Among them was anthropology professor Rory Becker, who said students in his introductory classes got a first-hand look at archeology in action.

“I think a lot of the students were surprised at how much work was involved,” he said. “It takes coordination of many, many moving parts — plus, straight digging holes.”

For many of them, Becker said, the high-impact, experiential learning activity was a chance to decide whether fieldwork would be a suitable career path. The team’s 12-hour days from Oct. 9 to 13 often began and ended in the dark. 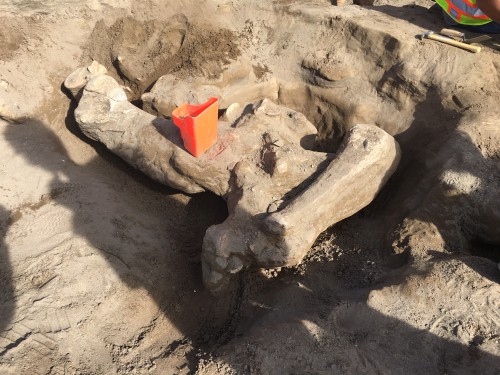 “The students were working hard, talking about their ideas, leading their peers,” Corsini said.
“They were all excited to get out there.”

Students from three anthropology courses helped remove giant arm bones, including the ulna, radius and humerus, as well as tusks, a cranium and several vertebrae. Becker and Corsini said they suspect the mammoth may have been a juvenile because the ends of the long bones don’t appear to be fused to the shaft.

“The type of sediment surrounding it suggests that it may have been in slow-moving water,” Corsini said.

He was surprised that they didn’t encounter an assemblage of other fossils, such as camels, sloths, bison, and rodents, near the larger mammoth bones.

Mammoths and mastodons both roamed North America about 2 million years ago, and the last of these creatures died out on the continent 10,000 years ago. Eons of sediment and pressure had preserved the bones, so exposing them to air made, particularly the tusks, vulnerable to delamination. To protect them, the team removed the bones packed in sediment, covered them in plaster, and transported them to campus on flatbed truck. Corsini, an experienced paleontologist, worked quickly with super glue at the site to stabilize the tusks. All of the elements are now stored securely adjacent to biology and anthropology labs on campus.

Becker compared the process to dunking a cookie into a cup of tea while bungee jumping, but said the bones are in overall good condition.

“It’s a load of work,” he said. “Getting them back intact is the biggest challenge and achievement.”

It also means that smaller bones like teeth and fingers might still be enclosed within the larger sections. Teeth could clarify whether the find is actually a mastodon, and reveal details about the animal’s diet. Reed-Jerofke agreed with Becker that the find will provide three to five years of research papers, conference presentations and capstone projects for EOU students.

“We anticipate enduring opportunities for student contact with the bones,” Becker said. “Far beyond the 30 students who helped dig them out.”

Mammoth bones wrapped in plaster arrive to campus on a flatbed truck on Oct. 15.

He said research will begin during the stabilization process as individual bones are inspected and preserved for the long term. Future studies could cover a wide range of topics, asking how long ago the mammoth died, how old it was, how it got to that location, where the rest of the remains went, what it ate, or what kind of environment it lived in.

Corsini said his microbiology students will work closely with the anthropology department to characterize the remains of microscopic life associated with the mammoth. This kind of collaboration has been present since the project began last spring, Reed-Jerofke said.

“It’s special to have this opportunity, and to see this level of collaboration in such a short time to get the bones out safely and successfully,” she said.

Eventually, she said they hope to display the remains for visitors to see. The partial skeleton means that an exhibit might be set up to recreate the dig scene. Corsini said he looks forward to sharing the find with students and the community.

“It’s always amazing to see something like that — this huge creature that’s no longer on the planet,” he said. “I always feel a little bit of awe.”

Becker also expressed his gratitude for the partnership between alumni and the construction workers on the site.

“This was a once-in-a-lifetime thing for the students involved, and it was provided by the Woodward family,” he said. “And the Knife River guys were awesome. We wouldn’t have gotten it here without them. They are expert operators and worked well with the students.”