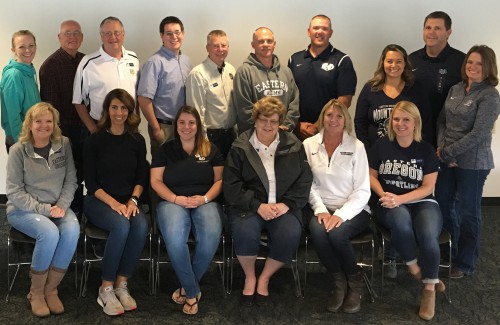 Nov. 22, 2017 La Grande, Ore. — After feasting, napping and shopping during the holiday weekend, Eastern Oregon University alumni and leaders come out in support of EOU on #GivingTuesday.

The Tuesday after Thanksgiving, Nov. 28 this year, marks a nationwide day of philanthropic giving, and the launch of the EOU Foundation’s year-end campaign for the Eastern Fund. Contributions to this unrestricted fund make it possible for the foundation to provide scholarships, develop capital projects and strengthen academic programs.

Every leadership board at EOU has committed to achieve 100 percent participation by the end of 2017. That means that every member of the governing board trustees, the EOU Foundation Board of Directors and the Alumni Association Board of Directors has promised to give to the EOU Foundation. This effort is part of a larger goal in EOU’s strategic plan. “The Ascent” includes a specific objective to increase the percentage of alumni who give annually.

“It’s so important to give back to the things that made you who you are,” McNamee said. “[EOU] really contributed to who I am now, and it feels good to give back for future generations.”

The EOU Foundation often sees an uptick of gifts as the year draws to a close. McNamee said she suspects the prospect of possible tax breaks and a pervasive sense of generosity during the holidays contribute to the annual trend. In 2016, donations to the Eastern Fund in November and December exceeded $389,000.

McNamee graduated in 2000, and recently chose to get involved as a member of EOU’s Alumni Association Board of Directors. She said the connections she made as an undergraduate in La Grande made a lasting impact on her life and career.

“EOU provided so many neat opportunities… I did an internship in Washington, D.C., participated in student government — things I wouldn’t have been able to do in Corvallis,” McNamee said. “This campus has so much to give, and does so much for students.”

She emphasized the value of becoming a donor as a recent graduate, and said alumni should feel empowered to contribute at whatever level suits their situation.

“It’s a good habit to establish early on,” McNamee said. “Then it’s easier down the road when philanthropy becomes more important to you.”

McNamee echoed her peers on EOU leadership boards in encouraging alumni, friends and community members to “make it possible,” by supporting EOU on Nov. 28 with a gift to the Eastern Fund.