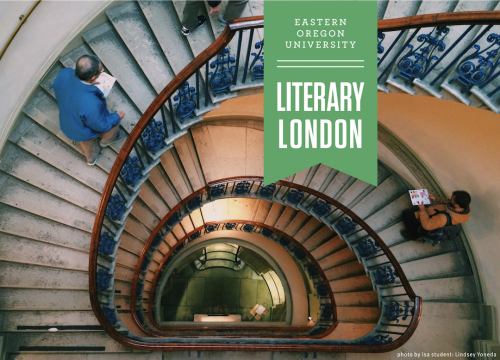 Feb. 6, 2018 La Grande, Ore. — Following in the footsteps of characters from British classics, Eastern Oregon University alumni, students and staff will explore the literary legacy of London on a 10-day trip this summer.

The Literary London tour, organized by EOU’s English department and international student services office, explores the legendary city through its most well-known authors and stories. The itinerary, set for June 21 to July 2, has been custom curated by International Studies Abroad (ISA), and professional ISA tour guides will host the group and coordinate activities throughout the trip.

Attendees will experience Shakespeare’s plays first-hand at a workshop and performance in the Globe Theatre, followed by a day’s worth of Dickens, a Virginia Woolf walking tour and a guided excursion to the British Library. The trip also includes a West End theatre show, a day in East London’s ethnic communities and free time to explore the city independently.

Nancy Knowles, an English professor at EOU, said she organized the tour two years ago but had to cancel due to low registration.

Eastern is more than just classes, it’s a community,” she said.  “And this can be a really powerful thing for a community to travel together, which is why we’ve opened up the invitation to include non-students as well.”

Students can earn two English credits for participating, but the experience itself comes with its own rewards. Knowles said a volunteer opportunity could put attendees in touch with refugee communities in London.

“Some people may know each other and some are new, but having this adventure together knits the group together in really powerful ways,” she said.

Another escape from the 18th Century comes in the form of a walking tour through East London, where many of the nation’s modern writers spring up.

“British literature now comes from a variety backgrounds and people,” Knowles said. “We’ll be able to get outside the tourist spots and experience the diversity of the city, as well.”

Knowles specializes in British Literature, teaching EOU’s survey courses each year, and said this trip offers a chance to see the ancient city in a new light.

“I have been to London before a few times, but I’m looking forward to re-inhabiting it in a new way,” she said. “It’s exciting to think about the pictures in my mind from literature and how they map onto London today.”

The trip costs $2,700 per person, not including airfare, and interested parties must commit to attend by Feb. 15. Payment is due by April 15. Janet Camp, international student services coordinator at EOU, handles applications and can answer additional questions at jcamp@eou.edu.