EOU production of “Les Miserables” a realization of director’s dream 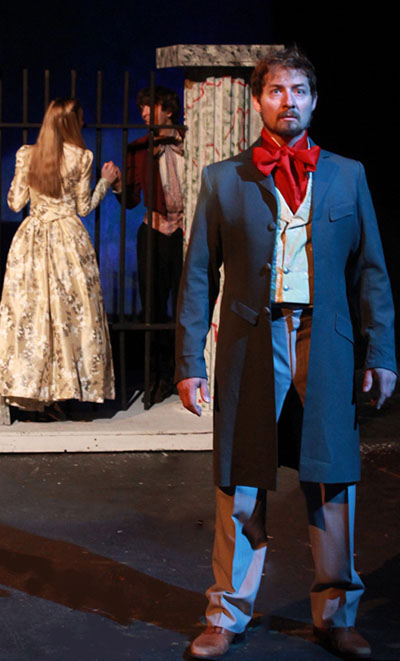 May 19, 2014
LA GRANDE, Ore. (EOU) – When “Les Miserables” opens at Eastern Oregon University this Thursday, it will mark the realization of a vow made more than 25 years ago.

In 1986, Kenn Wheeler was completing his last year of studies for his bachelor’s degree in theatre. The associate professor and production director recalls his first introduction to the epic musical that will unfold soon in McKenzie Theatre in Loso Hall.

“I was working for the grounds crew at Southern Utah University during the summers while I was in school. During the summer of 1986, I started listening to a musical soundtrack of a new show scheduled to open on Broadway a few months later. The show was ‘Les Miserables,’ which had been a smash hit in its London production.”

“I remember I was weeding a flower garden while listening to the soundtrack on my Walkman,” Wheeler continued. “By the time the cassette tape ended, I was kind of a blubbering mess. The music of this show was so magnificent that I vowed one day to direct my own performance. Unfortunately for me, it was so popular that an amateur production did not become available until 2013. This show is the realization of my dream.”

“Les Miserables” tells the story of Jean Valjean, a man who has made mistakes in life and paid for them by spending 19 years in prison. He vows to find and care for Fantine, the child of one of his factory workers, after he realizes he has wronged her and caused her death. Through it all, Inspector Javert, a policeman who believes Valjean needs to be captured and imprisoned once again, pursues him.

This classic story set in 19th century France examines the idea of mercy versus justice, and the ability to put evil behind and live a meaningful life. Helping to deliver the narrative are the compositions of Claude-Michel Schönberg and lyrics by Herbert Kretzmer, considered to be among some of the most beautiful songs ever written for the stage.

While the musical has been produced all over the world, the decision to present it at EOU was not an easy one for the production crew comprising both theatre and music departments.

“This is a huge show,” Wheeler explained. “It has a cast of 50 people and demands an elaborate amount of scenery and nearly a hundred costumes. We really had to think about how much work it would take to make it a reality.”

The difficulty of the music motivated the director to open auditions to community members as well as students.

“I wanted to be able to access a large amount of community talent to enhance the show,” he said. “In fact, several of our major roles are filled by local talent.”

EOU students, including several theatre and music majors, landed most of the leads with seniors Rick Mugrage and Emily Smith cast as Jean Valjean and Fantine.

Israel Bloodgood and Madison Ribich play the young lovers and Shahayla Ononaiye is Eponine. Dylon Wagoner takes on the role of student leader Enjolras, and Daniel Wagner and Ellie Aiton portray the Thénardiers.

Students and community members alike round out the remaining members of the extensive cast. 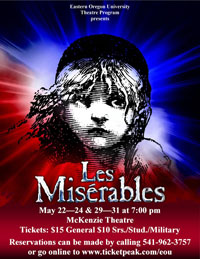 Tickets are $15 for general admission and $10 for students, seniors, and active and retired military. Call 541-962-3757 to make reservations or purchase tickets online at www.ticketpeak.com/eou.