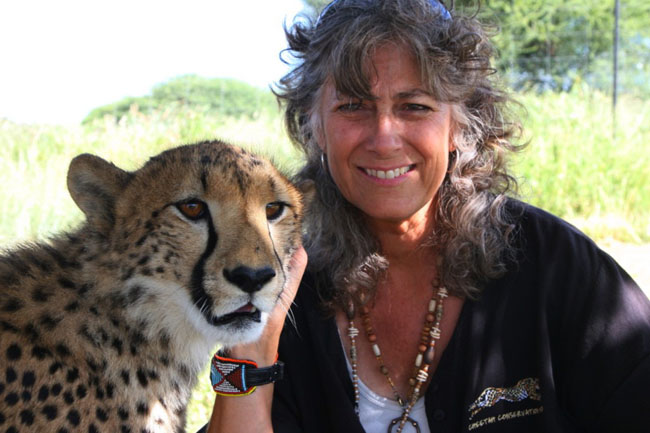 September 6, 2013
LA GRANDE, Ore. (EOU) – A rare opportunity to hear from a leader and innovator in wildlife conservation is coming up this fall at Eastern Oregon University.

Laurie Marker, Ph.D., founder and executive director of the Cheetah Conservation Fund (CCF), will be on campus during Homecoming to talk about her ongoing field research and conservation efforts in Namibia, Africa.

The public presentation is planned for 3 p.m. Friday, Oct. 4 in Badgley Hall and is the highlight of a reunion for former EOU science students. A reception is planned at 2 p.m. in the Badgley foyer.

Marker is also EOU’s 2013 Distinguished Alumna. She and fellow award recipients will be honored during a ceremony Friday evening in the Gilbert Center.

A 1990 graduate of Eastern’s distance education program, Marker founded CCF the same year. She went on to earn a doctorate from Oxford University in England and is now considered one of the world’s foremost experts on cheetah biology, ecology and conservation.

Marker’s work with cheetahs goes back 16 years prior to establishing CCF. Her first introduction to the fastest land animal was at Wildlife Safari in Winston, Ore., where she helped develop the most successful captive cheetah-breeding program in North America.

Since 1990, CCF’s conservation strategy has contributed to increasing the wild cheetah population in Namibia by approximately 50 percent. Despite this success, cheetahs remain Africa’s most endangered big cat with roughly 10,000 remaining in the wild.

CCF’s long-term studies analyze and monitor the factors affecting the cheetah’s survival in the wild. Results are used to develop conservation policies and education programs that have reached more 300,000 people.