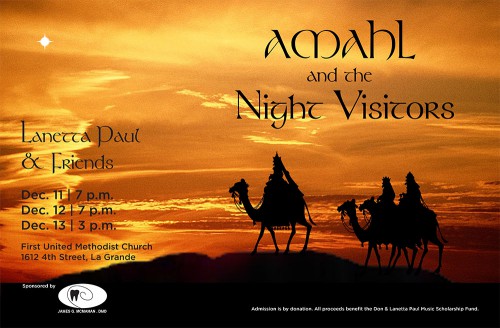 LA GRANDE, Ore. – Lanetta Paul and Friends are presenting the one-act opera “Amahl and the Night Visitors” with performances at 7 p.m. December 11-12, and 3 p.m. December 13 at the United Methodist Church.

Composed by Gian Carlo Menotti, “Amahl and the Night Visitors” is the first operatic work commissioned for American television audiences and was broadcast live December 24, 1951 as the Hallmark Hall of Fame’s debut production.

Set in the first century, the opera tells the story of a boy named Amahl and his mother living in poverty near the town of Bethlehem. Amahl, who needs the help of a crutch to walk, used to be a shepherd but his mother has been forced to sell his sheep. Just when they believe there is no other option but to become beggars, three Magi arrive seeking a place to rest and their lives are forever changed.

J. Michael Frasier is the musical director for the performance, Lanetta Paul is the accompanist and Danny Bailey will play the oboe.

Donations will be accepted at the door to benefit the Don and Lanetta Paul Music Scholarship Endowment established with the Eastern Oregon University Foundation. Please make checks payable to the EOU Foundation.

The concert is sponsored by James G. McMahan, DMD.

« Film showing: “The Campaign” | The economics of beer »