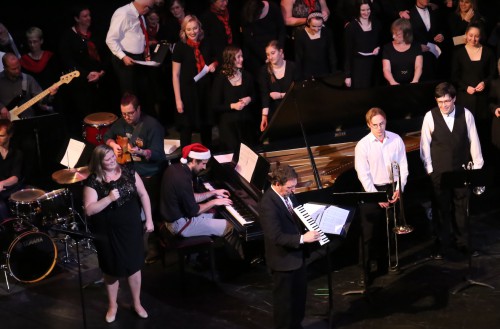 Daniel Durrell, a sophomore music student from Yamhill, has performed on the concert grand piano several times, most recently for the Holiday Music Festival.

“I spend a large amount of my time at the piano whether it is performing, rehearsing or just playing for fun. So having quality equipment is very important to me,” he said. “At the end of the day, I believe having the right instrument to practice and perform on plays a big part in my growth as a musician.”

Durrell’s academic focus on piano performance brings him into contact with the concert grand more often than other students, and he’s become attuned to detecting quality.

“An instrument that is low-quality or faulty takes away from the musician’s ability to express themselves through what they are playing, while an instrument of higher quality opens up so many possibilities,” Durrell said.

The current piano has served EOU since it was manufactured in 1953. After 64 years of careful maintenance and consistent use, music faculty plan to continue the department’s legacy of excellence by investing in a high-quality grand piano.

The Oregon Agriculture Foundation, founded by McKenzie Theatre’s namesakes Glen and Jean McKenzie, offered a $40,000 matching gift to support efforts to purchase a new concert piano. At the same time, EOU recently received funding to transform the infrastructure of Loso Hall into a performing arts facility that is unparalleled in the region.

Music professor and pianist Matt Cooper said such a venue requires professional grade equipment to fulfill the expectations of performers, students, attendees and the community.

“This piano is part of the package for a state-of-the-art performing arts facility,” Cooper said.

He joined Peter Wordelman, music faculty member and choir director, in attesting to the piano’s impact on current and future students, as well as regional schools and organizations.

“When our area students come and perform, we want to ensure that they have access to the best equipment in the region,” Wordelman said.

A new grand piano promises to attract high-achieving musicians and performers, while improving the concert experience for university and community events. The project aims to raise $150,000 — the going rate for a top of the line instrument that would provide premier performances far into the future. The Oregon Agricultural Foundation will match up to $40,000 in private gifts and grants, and the additional $70,000 will come from additional support through the EOU Foundation.

Durrell called the concert grand piano “vital” to EOU’s role as an academic and community performance venue, and said this project is personally important to him.

“It shows this school is interested in building a stronger music program,” Durrell said. “And to students such as myself, it’s always good to see the university take initiative in helping support and encourage students’ growth.”

To learn more about the project and how to get involved, contact University Advancement at foundation@eou.edu or 541-962-3740. Visit eou.edu/piano for details.