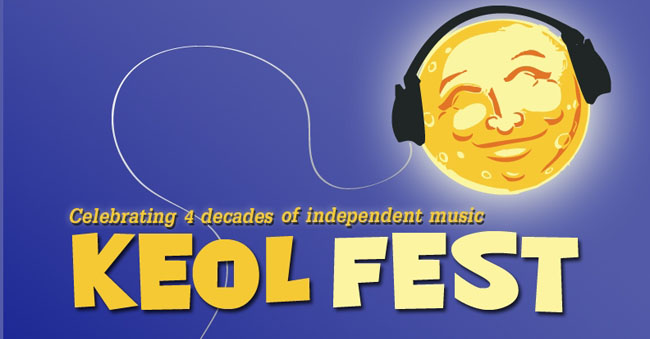 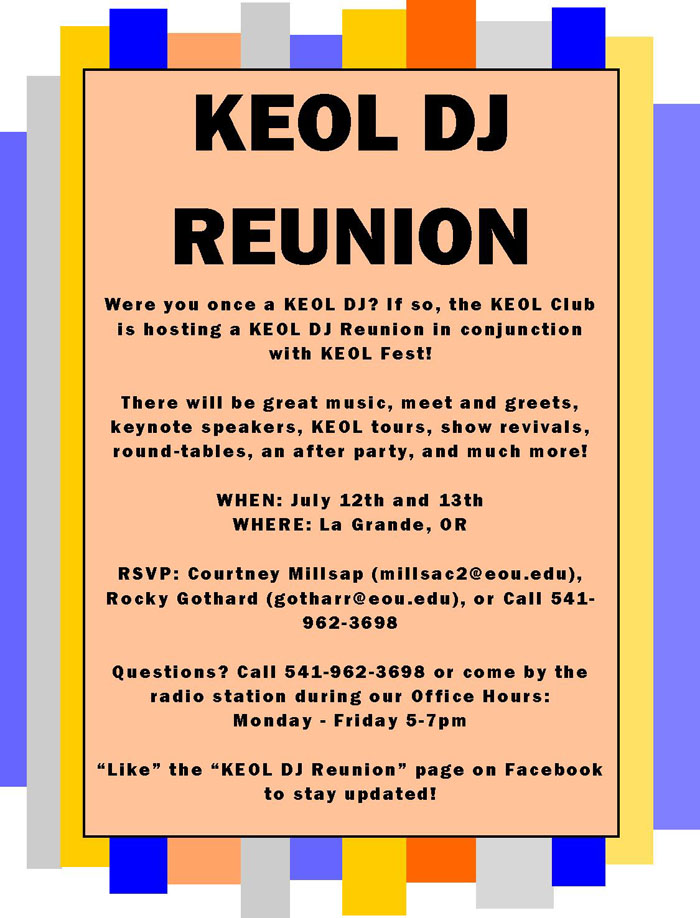 It’s called KEOL Fest and is part of Crazy Days this year. Performances by 25 bands and a disc jockey reunion will be rolled into one amped-up weekend marking four decades of independent broadcasting by Eastern Oregon University’s campus radio station.

Exclusive events are planned for current and former KEOL DJ’s including a private concert, meet-and-greet, keynote speakers, barbecue, guest shows and an after party.

The KEOL Club is teaming up with station management, La Grande Main Street and the Union County Timber Cruisers for the festival.

“This will be the first DJ reunion and also the first big concert series the station has organized,” said EOU student Courtney Millsap, who is coordinating the reunion.

Millsap said there are hundreds, if not thousands, of individuals who have been campus DJ’s over the years.

“We want to reach out and make connections to ensure KEOL stays here for a long time.”

Millsap is the secretary for the recently revived KEOL Club, which formed prior to the establishment of the radio station itself in 1973. While the two entities are separate, they run parallel paths toward the same goal of keeping KEOL on the air.

Paul Wheaton, Jack Kemp, Mark Masterson and Jenifre Tarkus are among the names many alumni will recognize. Their collective involvement with the station spans generations.

Wheaton is a figure in the permaculture community and Kemp now works at Oregon State University’s station, KBVR. Both are confirmed keynote speakers for the reunion. Masterson is the community liaison for the station and Tarkus is KEOL’s longtime music director.

“In order to be viable on campus, we have to be viable in the community,” said Rocky Gothard, station manager. “KEOL Fest is one way we’re showing support for the region. Bringing more people to town brings more dollars and businesses will benefit.”

Gothard, who is booking the bands, said to expect a “true music festival” with options that will appeal to diverse audiences and include a mix of local and national talent.

“I picked the music for La Grande, not for myself,” he explained. “It’s independent and eclectic, ranging from jug band to experimental folk, thrash metal to good old-fashioned rock and roll.”

General admission passes are $25 and available to purchase at KEOL, Benchwarmers Pub and Grill and The Hobby Habit. Other outlets include Betty’s Books in Baker City, KWVR Radio in Enterprise, Great Pacific Wine and Coffee Co. in Pendleton and Miss Willie’s in Hermiston.

DJ’s attending the reunion can get festival passes for just $15 through KEOL directly. RSVP’s are requested to Millsap at millsac2@eou.edu or Gothard at gotharr@eou.edu.

For more information on the reunion and a festival schedule, visit www.facebook.com/KEOLDJReunion or call the station at 541-962-3698.