“The Jungleers in Battle” documentary highlights service of EOU alumnus 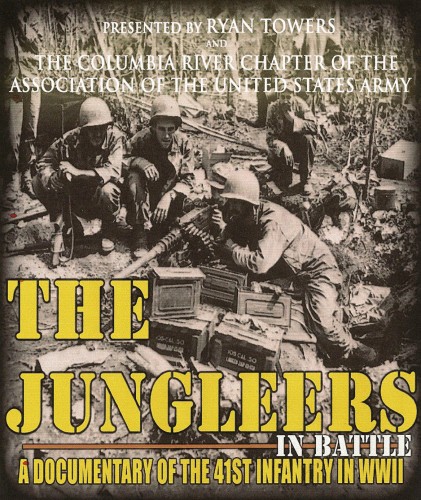 EOU Alumnus Fred Hill and fellow veteran Fred Parish are featured in the WWII documentary, and both will be in attendance at the film showing.

“The Jungleers in Battle: A Documentary of the 41st Infantry in WWII” highlights the Oregon, Washington, Idaho and Montana National Guard group considered to be the “best” National Guard infantry division in the U.S. prior to WWII.

Division members and Union County residents Fred Hill and Fred Parish are included in the film. Audience members will have the opportunity to visit with both Hill and Parish about their experiences at the event.

Hill, a noted photographer and local historian, donated his complete collection of WWII images to EOU’s Pierce Library and in 2011 he was named the university’s Distinguished Alumnus.

The 41st was activated on Sept. 16, 1940, and trained at Camp (Swamp) Murray in Washington before being rushed to defense of the Oregon and Washington coastline after the attack at Pearl Harbor. They were then sent overseas, arriving as the first American Infantry Division in Australia, and fought under General MacArthur through New Guinea, the Philippines and on to occupation duty in the Hiroshima District of Japan.

Alisha Hamel of the Historical Outreach Foundation directed “The Jungleers in Battle.” Proceeds from the showing will support the foundation’s mission of bringing a history field trip to schools at little or no cost.

Admission is a suggested donation of $10 per person, payable at the door. For more information contact the EOU Alumni Office at 541-962-3740.

> View the movie trailer at www.eou.edu/alumni/events/jungleers.