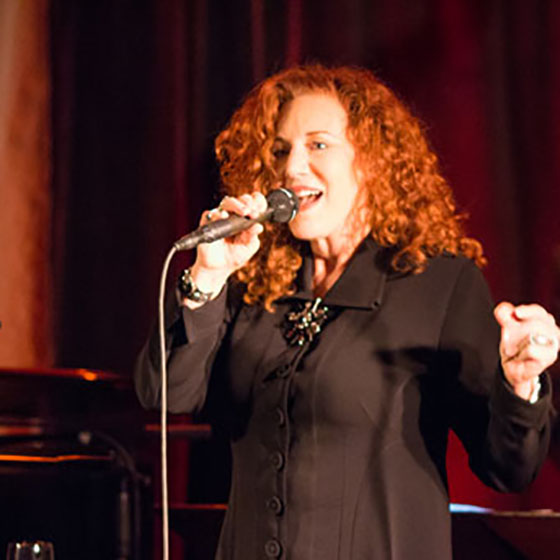 Photo by Steve Mundinger / Jazz recording artist Kathy Kosins will be on campus this week working with students and giving a special duo performance with Matt Cooper, professor of music, from 8-10 p.m. Thursday at Ten Depot Street Restaurant.

Kosins will be on campus Wednesday and Thursday meeting with students studying jazz, American music and other genres, in addition to coaching EOU’s 45th Parallel Ensemble and vocalists in performances of contemporary commercial music.

“We’re exceedingly fortunate to have Kathy Kosins visit campus, all the way from Detroit,” Cooper said. “She has recorded with many of the top names in the business, and has performed and garnered praise internationally.”

“She is a very ‘musicianly’ singer, in that she picks and arranges her material with exceptional care, and sings every note with great finesse and subtle nuance. She makes every word and every note count,” Cooper added.

Kosins was born and raised during Detroit’s Motown era and began singing and arranging background vocals for producer Don Was, now president of Blue Note Records, in the early 1980s. This experience led to her becoming a sought-after session singer and she began touring with Was/Not Was.

In the early ’90s, Kosins gravitated toward jazz. Following stints with JC Heard and the Nelson Riddle Orchestra she recorded her debut album, “All in a Dreams Work,” in 1996. Since then she has released four more albums as a leader, writer and arranger. A sixth album, “Uncovered Soul,” is slated for spring release.

Kosins has recorded and performed with Mitchell Foreman, Tamir Hendelman, Robert Hurst, James Moody, Randy Brecker, Terrell Stafford, Cyrus Chestnut, Larry Goldings and many others. She is a past recipient of the Michigan Council for the Arts Jazz Composer of the Year award, and has presented clinics and concerts at universities across the United States. She is also a recipient of the American Society of Composers, Authors and Publishers award.

She has performed in nightclubs across the country including Birdland, the Blue Note and the Jazz Standard in New York City, as well as many international festivals such as the Earshot Festival in Seattle, Tanglewood Music Festival in Lenox, Massachusetts, the North Sea Jazz Festival in Rotterdam, and festivals in Austria and Switzerland.

The Chicago Tribune has called Kosins “one of the most alluring voices in jazz,” and Berlin critic Matthias Kirsch says her last two albums – “To The Ladies of Cool” and “The Space Between” – “rank among the top 10 vocal jazz records of the last 15 years.” Famed composer Johnny Mandel says, “Kathy Kosins is a joy to hear. Her lyrics on Hershey’s Kisses melt in her mouth.”

For tour dates, album information and more go to kathykosins.com.

Student fees directly fund the Visiting Artist Series at EOU, making it possible to bring professionals like Kosins from around the country to share their experiences. For more information on the program reach Cooper at 541-962-3559 or mcooper@eou.edu.