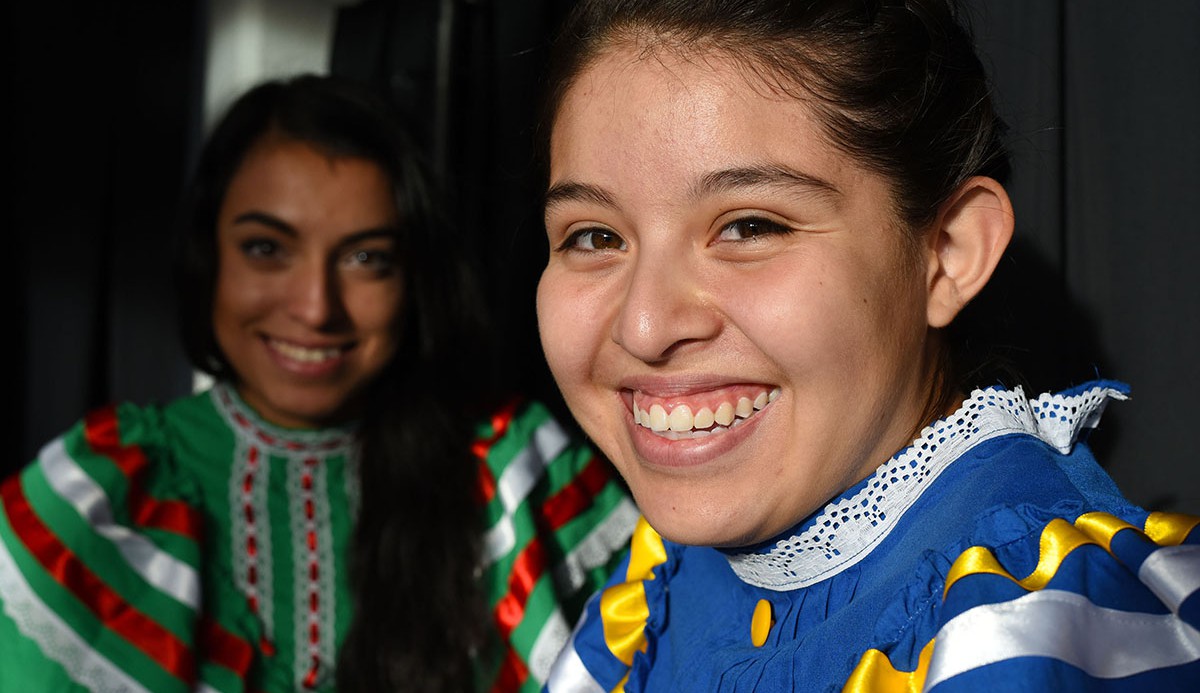 Photo by Laura Hancock / Take a trip around the world during the fashion show sponsored by EOU’s International Student Association Monday at 4 p.m. It’s all part of International Education Week activities at the university, Nov. 14-18.

Campus-wide events begin with an annual fashion show and conclude with a viewing of the documentary “Crossing Borders” Friday, Nov. 18. All activities are open to the public.

“I love adventures and during International Education Week I get to try new things from different parts of the world, all in one place,” said Naiomy Lohn, EOU student and IEW committee member. “I get to experience and at the same time learn about the different traditions and cultures.”

The fashion show kicks-off at 4 p.m. Monday in the Hoke Union Building, Room 339. Sponsored by the International Student Association, it offers a trip around the world through different cultural attire and features a performance by EOU’s African Drumming Ensemble.

At 5:30 p.m. a “Paint Your World” contest starts in the Hoke Main Lounge. All are invited to join international students in creating window artwork depicting the world from individual perspectives. Refreshments will be provided.

EOU’s own Olympic Games start at 7 p.m. in Quinn Coliseum, with Ping-Pong, three-on-three soccer and more.

Tuesday presents an opportunity to hear directly from international students about their backgrounds and English as second language experiences during a panel discussion at 4 p.m. in the Hoke Union Building’s main lounge.

At 5:30, a Zumba fitness class free for EOU students with ID is in Hoke Room 339. The drop-in, non-student rate is $5. An International Dance Night follows at 7 in the Hoke main lounge, offering a chance to learn salsa and other international dances taught by EOU students.

A Study Abroad Fair is from 11 a.m. to 2 p.m. Wednesday in the Hoke main lounge. Later that afternoon, gain a cross-cultural look into Latin American soap operas at 3 p.m. with ¡Telenovelas!, presented by the Conversations in Spanish group and Latino Impact Club.

Activities on Thursday start at 5 p.m. with a contest to “Name that Tune” in the Hoke main lounge, followed by another Zumba class at 5:30 in Hoke 339.

At 7 p.m., a learning version of speed dating challenges participants to absorb a language from another country during Speed Learning: Languages from Around the Globe in the Hoke main lounge.

Friday from 11 a.m. to 1 p.m. also in the Hoke main lounge, EOU’s multicultural student clubs are sharing a taste of the world with sushi, tacos, southern fried chicken and other items available for purchase.

At noon, Erin Austin, indie pop artist from the band OK Sweetheart, is performing in Mac’s Grill. Music by the Seattle-based group has been featured on the CW’s “90201” and “One Tree Hill,” ABC’s “Revenge,” MTV’s “Awkward” and Zales commercials. Austin’s solo performance features her fully developed repertoire with themes focusing on restlessness, change and progress.

The week’s celebration concludes with a showing of “Crossing Borders” from 3-5 p.m. Friday in Zabel Hall, Room 101. The documentary follows four Moroccan and four American university students as they travel together through Morocco. A discussion follows the film.