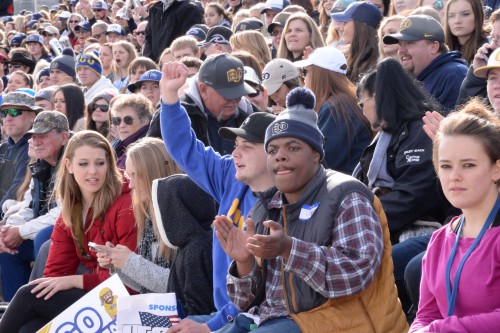 Sept. 26, 2017 La Grande, Ore. − Eastern Oregon University welcomes Mountaineer alumni and friends to celebrate their alma mater Oct. 6 and 7 on campus in La Grande with a host of homecoming festivities.

The weekend begins at the Mountaineer Athletic Association Scholarship Golf Scramble, held each year at Buffalo Peak Golf Course in Union. Mountaineer fans and alumni will join student-athletes and coaches for a friendly golf tournament fundraiser in support of scholarships. Last year’s event raised more than $5,000 for EOU student-athletes.

The annual Homecoming Parade sets off from Max Square at 5 p.m. Friday evening. Grand Marshals Terry and Mary Jo Lemon will lead more than 50 floats through downtown La Grande. Parade entries will be accepted through the day of the event.

Six individuals will be inducted into the Athletic Hall of Fame during the ceremony. Football alumni Jeff Church, Bicker Therien and Jerry Deal will join John Tolan (baseball) and Robin Lisak Johnson (softball) in accepting their nominations to join the EOU Athletic Hall of Fame. Art Thurnell will accept this year’s Mountaineer Athletic Legacy Award.

Alumni of EOU’s partnership program with Oregon State University will reunite Friday at 8 p.m. for a social at Bud Jackson’s, and meet up at noon on Saturday for lunch in Badgely Hall. The partnership program offers agriculture science classes to EOU students through co-enrollment. Graduates from a range of years will gather to reflect on their shared memories of EOU.

Softball alumni will relive their glory days with an exhibition game at 10 a.m. Saturday. Meanwhile, alumni of EOU’s baseball program will reunite over lunch in Hoke Community Room. Although the program left EOU in 2009, alumni and friends will reminisce about the golden age of baseball as Mountaineers.

Athletics events abound throughout the weekend. The EOU volleyball team will face-off against Oregon Tech at 7 p.m. Friday, and against Southern Oregon University at 1 p.m. Saturday. Both games take place in Quinn Coliseum.

Community members, alumni, and friends of EOU are invited to participate in the Homecoming Run/Walk Saturday morning. Registration begins at 7:30 a.m., and attendees can follow the 5K, 10K or one mile route that begins near Zabel and Ackerman halls in the center of campus.

The EOU Alumni Association hosts a breakfast for alumni and run/walk participants starting at 9 a.m. in the Hoke Community Room, and the group conducts its annual meeting in the same location starting at 10 a.m.

The EOU Foundation will hold a presentation for community members to unveil the university’s plan for improvements to the stadium and track. All interested parties are invited to attend, starting at 11 a.m. in the Gilbert Center.

A myriad of arts and culture opportunities run throughout homecoming weekend. John Whitten’s “Stochastic Resonance” exhibition will be open in the Nightingale Gallery from 11 a.m. to 4 p.m. Friday and Saturday. EOU Residence Life will coordinate a tour of La Grande from 11 a.m. to 3 p.m. Saturday starting from Max Square. The Portland Opera teams up with EOU for a special “to go” performance at 4 p.m. Saturday in McKenzie Theatre.

The weekend culminates with the Mountaineers’ homecoming match-up against Montana State University-Northern at 6 p.m. Saturday in Community Stadium. EOU’s top-ranked football program promises to draw alumni and local fans for its first night game of the season. Skip the line and purchase your tickets in advance at eousports.com. Celebrations begin at 3 p.m. in the Mary Horn-Edward Jones Tailgate Zone, and continue after the game concludes.

For more information about EOU Homecoming and a complete schedule, visit eou.edu/alumni/homecoming.