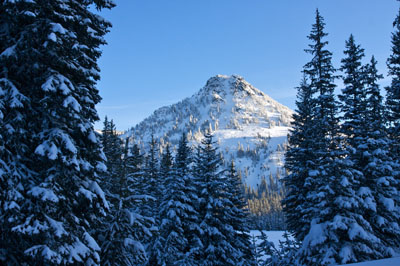 LA GRANDE, Ore. (EOU) – On its own, great music has the capacity to carry the imagination. When combined with vivid imagery, expect to be transported to a higher plane.

Audiences at The Observer’s 21st Anniversary Holiday Music Festival on Dec. 1-2 will be treated to the EOU Chamber Choir’s performance of “Alleluia” accompanied by the photography of Eric Valentine.

Weeks of rehearsal and multimedia work have culminated in what can be described as a majestic, tranquil and ethereal journey through scenes in eastern Oregon’s backyard. The Eagle Cap Wilderness, Hells Canyon, Steens Mountain, Hot Lake, Mount Emily – even the EOU campus – are among the many nearby locales captured with Valentine’s lens.

“There is so much flexibility artistically from the visual and musical spectrums, and it is exciting to see these elements come together,” said Peter Wordelman, professor of music and choir director. “This is also Eric’s life work, and we want to honor that.”

Wordelman and Valentine began collaborating several months ago on the idea for a multimedia project that would serve the dual purpose of promoting EOU’s music programs and the beauty of the region.

Valentine supplied hundreds of images, which EOU sophomore and media arts major Nick Johnson organized into a nine-minute slide show of the four seasons with thoughtful transitions to match the music. Johnson also sings with the Chamber Choir, so his creative work behind the scenes will come full circle at show time.

“My favorite part is when the moon slowly fades away…it’s almost hypnotizing,” Johnson said after presenting the project to Wordelman and Valentine for the first time in its entirety.

The song itself intensifies the dreamy feeling Johnson described. “Alleluia” is written by popular contemporary composer Eric Whitacre and includes just two lyrics, alleluia and amen, repeatedly rising and falling for the duration of the piece.

“I’m honored and thrilled to contribute images to this project,” Valentine said. “It’s amazing to me how photography can be used in so many different ways.”

In addition to the live performance, Wordelman plans to record a high-quality track of “Alleluia” with the Chamber Choir to combine with the selected images and make available on DVD. He hopes the production will help attract new music students to EOU and serve as a resource for local tourism.

Hear and see this unique presentation in person at 7:30 p.m. Saturday and at 3 p.m. Sunday in McKenzie Theatre in Loso Hall.

Tickets are $8 for adults, $6 for students and senior citizens and are available to purchase at Sunflower Books and the EOU Bookstore. Any remaining tickets will be sold at the door. All proceeds support the university’s music program funds held in the EOU Foundation.