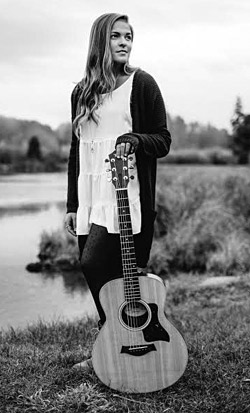 Listen to the winning entries!

“The craft of songwriting is really the focus of this contest and it’s a strength all four winners share,” said John McKinnon, a contest judge and professor of music at EOU.

McKinnon and fellow judges Luke McKern, Matt Cooper and Peter Wordelman listened to roughly 35 entries and selected the top six to advance to round two. All songs were evaluated on form, originality, lyric content and musicality.

Mike Mallory, owner of La Grande Stereo and Music, served as a non-partial judge and ultimate determiner of the top three entries. A faculty choice award was also presented.

Receiving first place is Morgan Stewart, a senior at Summit High School in Bend. Her winning submission “Take Your Time” features vocals, ukulele and guitar and was recorded on an iPhone.

“Songwriting has always been a passion of mine, so I was thrilled to have an opportunity to enter the first-ever EOU songwriting contest,” Stewart said. “I’m so thankful to have won this contest, for everyone’s support of my music, and for those who have inspired me along the way.”

Stewart’s song carries a message close to her heart about “having a love so unconditional toward someone that you will put your entire life on hold just for them,” she explained. “It’s a hopeful cry to someone you’ve lost, had to let go of, or someone who has changed. I know that is something a lot of us can relate to.”

“This song is about heartbreak and how to move on and not let it overcome and drag you down,” Aguilar said. “Many girls around my age helplessly fall in ‘love.’ Although they believe it will last, it sadly doesn’t, leaving them heartbroken until they fall in love once again. The cycle only repeats until finally that one special person is found.”

“I would like to thank Mr. Josh Rist, my choir teacher, for always encouraging me to keep writing and doing my absolute best!” she said.

Third place goes to Leo Dolan from Summit High School in Bend for “Meantime” featuring vocals, guitar and drums. A dream is what inspired him to write this particular song.

“I was playing music with one of my musical idols, Danielle Haim from the band Haim,” Dolan said. “I simply woke up and wrote it in about an hour.”

Dolan, who started playing guitar at age 8 and was writing songs by the time he turned 13, said he often uses nature-themed imagery in his lyrics.

“Growing up in Oregon definitely affected my songwriting style,” he added.

“’Green’ is the first song I ever completed and I wrote it on an airplane coming home from Guatemala,” Farrens said. “It’s about how people mature, change and go in different directions, ‘shedding’ their past in the process. I was inspired to use the metaphor of a tree losing its leaves because of all the vegetation and foliage I had seen on my trip.”

All winners are invited to record their songs professionally at EOU. Each of the students will also have the opportunity to participate as a guest performer with the music department during future concerts.

Stewart and Dolan are already set to open the second act for the 4 p.m. performance of “Then & Now: Replay” on Jan. 31 in McKenzie Theatre in Loso Hall.

Aguilar will join the same show on tour to Hermiston High School Feb. 10.

“It’s a really positive thing for young artists to participate in,” McKinnon said, “especially if they are thinking about continuing to focus on music as a vocation.”

Held for the first time last fall, the contest was open to any student enrolled in an Oregon high school east of the Cascades, or any Oregon resident home-schooled in grades nine through 12.

Plans are already underway for the next competition and organizers hope to include workshops in addition to the recording and performance opportunities.

“Songwriting is sort of a private thing, so having a venue like this for students is important,” Wordelman added. “It’s a pretty popular field and will continue to be an academic emphasis.”

Students who major in music at EOU have the opportunity to take classes in many different areas, including songwriting, electronic music, global rhythms, improvisation in addition to composition and arranging. Scholarships are also available.

> Listen to the winning entries!