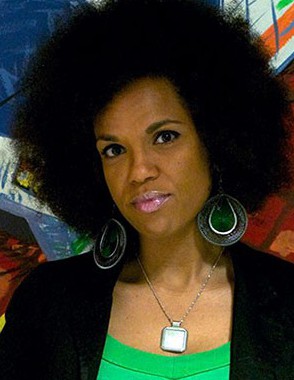 The Rural Organizing Project and Oregon Humanities are partnering to bring the conversation project “Why Aren’t There More Black People in Oregon? A Hidden History” to rural communities across the state including La Grande.

Imarisha will speak at 6:30 p.m. Thursday, April 14 in Huber Auditorium, Badgley Hall Room 102. The event is free and open to the public.

Imarisha is one half of the Portland-based spoken word poetry duo “Good Sista/Bad Sista.” Her nonfiction book “Angels with Dirty Faces: Three Stories of Crime, Prison and Redemption” was published earlier this year and her poetry collection “Scars/Stars” debuted in 2013.

In January, Imarisha was among the individuals announced as nominees for Oregon’s Poet Laureate. She is also the editor of two anthologies, and directed and co-produced the documentary “Finding Common Ground in New Orleans” among many other projects. She has taught at Portland State University, Oregon State University and New Hampshire University.

Following the presentation, local leaders will kick-off a discussion about breaking down obstacles to building a community based on safety, dignity and justice.

“Walidah is a powerful speaker, presenter and human being who is helping to reveal Oregon’s historically racist beginnings and how this influenced our state’s history and current positions,” said Justin Chin, director of EOU’s Career Services Center.

“I am honored to call Walidah a friend and colleague from my past work and hope everyone who attends will be empowered by her message,” Chin added. “It will challenge many of our beliefs of Oregon and lead us to examine structural inequities, while also inspiring us to build a more equitable and inclusive nation, state and campus.”

Individuals and groups involved with bringing the speaking tour to campus include Rosemary Powers, professor of sociology, Bennie Moses, director of EOU’s Multicultural Center, the Black Student Union, Mission for Environmental and Social Awareness (MESA) and the Student Council for Multicultural Affairs.

Additional support comes from the National Endowment for the Humanities, Oregon Rural Action, C.U.R.R.E.N.T.S. of Justice for Peace and Racial Justice in Eastern Oregon.

> Listen to OPB’s “Think Out Loud” interview with Walidah Imarisha and Justin Chin when he was an advisor at Linn Benton Community College.