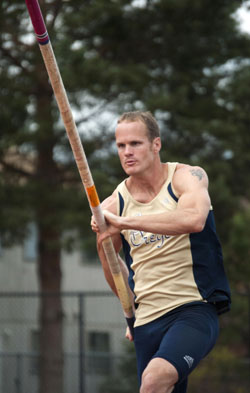 Haynie began the second day with a first place finish in the 110-meter hurdles. He set a personal record with a 14.95 finish, which is sixth on the EOU all-time list. Haynie followed that finish with a sixth place finish in the discus at 121 feet, 10 inches.

Haynie finished Day 1 with a total of 3,924 points. He opened the day placing second in the 100 meters with a time of 11.61. Haynie then won the long jump with a personal best mark of 23 feet, 6.75 inches. His mark is second on the EOU all-time list. A ninth place finish in the shot put would follow. Haynie’s top toss was 40 feet, 4.75 inches.

Haynie then won the high jump with a top leap at 6 feet, 11 inches. He grabbed 906 points with the event win. The Nampa, Idaho, native finished the day placing second in the 400 meters with a time of 50.19, a new personal best.

In Friday’s high jump, the senior cleared 6 feet, 11.5 inches for the title. He entered the event as the top seed. It is his seventh national title in his two years at Eastern, and he enters Saturday’s pole vault as defending champion and top seed.

Kimmy Moore had an All-American, fourth place finish in the women’s heptathlon. The senior finished with a personal record point total of 4,705. She is now second on the EOU all-time list behind Talia Hackney’s 4,934 point total in 1989.

Moore opened the second day with a ninth place finish in the long jump at 5.21 meters. She then finished fifth in the javelin with a toss of 117 feet, 4 inches, and then second in the 800 meters with a 2:16.51, a new outdoor personal best.

The Mountaineers ended their season in Marion with seven All-Americans. Read more…