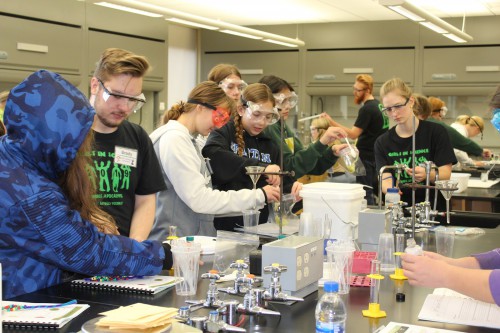 EOU and the Northeast Oregon Area Health Education Center (NEOAHEC) hosted the 19th annual Girls in Science event. Evans participated in the event in 2013 as an eighth grader and returned to volunteer this year as a university student.

Evans said the experience took her back to her first time attending Girls in Science.

“I remember being exposed to how many things in the science field I could do to help make the world a better place,” she said.

Girls in Science began in 2001 with the intention to give young girls exposure to STEM in a non-competitive environment.

“The idea is to give young women a vision of themselves as a scientist,” Chemistry professor Anna Cavinato said. “We want to show them that STEM is a feasible career for them to pursue.”

About 100 sixth to eighth grade students from Eastern Oregon spent the day solving a mystery. Through scientific observation, attendees made logical findings that supported their analysis.

Rotating annual themes between crime scene investigations, environmental and health-related mysteries, this year’s theme landed on the Zombie Apocalypse. The girls used science experiments, math and computers to find out how the zombies came to be. Attendees conducted chemical reactions, wrote computer code, used math to decode encryptions, and learned more about the human body.

Throughout the day, Cavinato noted that the girls’ confidence increased as they became more engaged. By the end of the event, students presented their findings in front of more than 200 people.

Evans said she remembers looking up to the 50 volunteers helping run activities.

“[I thought to myself], I want to help out with this when I am older,” she said.

“The entire day was a reflection of how all of these different investigations in different disciplines can come together to provide an answer to solve the mystery,” Cavinato said.