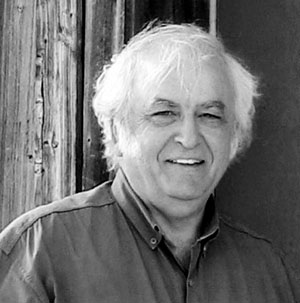 November 14, 2012
LA GRANDE, Ore.  – A book launch reception to celebrate the publication of “Keeping the Swarm: New and Selected Essays”  by George Venn is on Sunday, Nov. 18.

The public is invited to the drop-in event from 2-4 p.m. in the Colleen Johnson Room at Cook Memorial Library.

Friends and readers new and old may examine Venn’s seventh and latest book and meet and greet the author – a prize-winning poet, editor, educator, writer-in-residence and emeritus professor at EOU.

Copies of all of Venn’s books will be available to purchase at the event, including his best-selling monograph on C.E.S. Wood and Chief Joseph, and his poetry collection “West of Paradise.”

In 224 pages, “Keeping the Swarm” includes 20 photos and 11 personal essays, six of which have been published previously and five appearing in print for the first time. Charged with sweetness and stinging, they create a memorable collage. The title essay tells the story of Venn’s parents and grandparents’ contrasting lives, roles and forces. 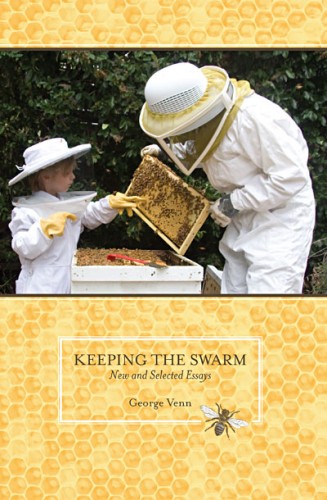 A surprise Christmas present from a man who never went shopping is the center of “Grandpa’s Gift” and “Eulogy for George L. Mayo” is the poet’s tribute to his grandfather.

The story of a boy who hears unforgettable singing by Upper Skagit Indians comes to life in “Faith of Our Fathers” and in “Winter Tales: Spirit Lake” the poet meditates on winter traditions in a welcoming small town.

“You Wanta Go to Town?” details Venn’s experience as a college kid being fired from his truck-driving job, while “Singing the Silver Valley Cannonball” traces the evolution of the author as a singer–from hymns to musicals to secular folk song.

“Leaving Salamanca” tells the student poet’s story of traveling to study at a famous university and “The More We Get Together” narrates Venn’s adventures while teaching in China from 1981-1982.

In the final essay “Barn,” the poet meditates on the images, stories, traditions and significance of the farm structure.

“Keeping the Swarm” appears with genial praise by reviewers throughout the Pacific Northwest.

“Venn provides a guidebook for us to examine our own piece of the world, to recognize the beauty, grace and peril, until we see it ‘solid and clear,'” notes Robert Stubblefield, a faculty member in creative writing at the University of Montana.

The wide and eclectic range of places, people and events is based on Venn’s life experience. Born George Fyfe in rural western Washington in October, 1943, the death of his father forced his mother Beth to leave her infant second son to be raised by her parents Hazel and George Mayo on their farm and apiary near Mt. Rainier.

Eventually, Beth remarried Rev. Frank Venn, a Tacoma minister and George and his brother Douglas became stepsons of a strict, musical, dogmatizing Presbyterian. Between 1947 and 1957, the Venn household moved four times in the Northwest, but each summer, the Fyfe-Venn brothers returned to work on the Mayo apiary and farm.

Venn graduated from Spirit Lake High School in 1961 with honors and accepted an athletic scholarship to The College of Idaho, but eventually chose international liberal arts. In 1964, he studied and worked in Quito, Ecuador, then in 1965 he spent the fall and winter studying and working in Spain and the spring in London. In 1966, he married and completed his bachelor’s degree. In 1970, he earned a master of fine arts at the University of Montana and then began teaching at EOU.

While at EOU, Venn served 10 years on the Indian Education Institute Board, advised the Ars Poetica reading series and “Oregon East” magazine for 18 years, directed the creative writing program, co-wrote with Lois Barry the writing track for the English degree, instigated the creation of the writing lab, began the English as a second language program, brought the National Writing Project to campus, and taught the first courses in Western, Northwestern and Native American literatures.

In 2002 the university selected Venn as recipient of the Distinguished Teaching Faculty Award and he retired to write full-time.

As a Grande Ronde Valley resident for 42 years, Venn has contributed to the community in multiple roles. He served as chair of the Mt. Emily Food Co-op, leader of the Committee for Catherine Creek’s successful opposition to dams, supervisor for the Solar Water Heater project, chair of the Agriculture Subcommittee for Union County Economic Development, advocate for free-flowing rivers, wilderness and land-use planning, member of the state-wide Folk Arts Advisory board, board member and president of the Oregon Council of Teachers of English, judge for the first Oregon Book Awards, and a founding advisor to both Literary Arts and the Fishtrap Gathering.

Venn’s first two books were well received and in 1980 his poetry garnered a national Pushcart Prize. In 1981-1982, he was among the first American writers to teach English in post-Cultural Revolution China. In 1988, the Oregon Institute of Literary Arts awarded his third book “Marking the Magic Circle” a silver medal. From 1989 to 1994, he designed and directed the six volume Oregon Literature Series, for which he received the Stewart Holbrook Award for “outstanding contributions to Oregon’s literary life.”

In 2005, the Oregon Cultural Heritage Commission again recognized “Marking the Magic Circle” as “one of the 100 best Oregon books in the two centuries.”

Copies of “Keeping the Swarm” are available to purchase through the publisher, Wordcraft of Oregon. Wordcraft has served those writers of exceptional merit whose work is of lasting value but falls outside the commercial norm since 1988.