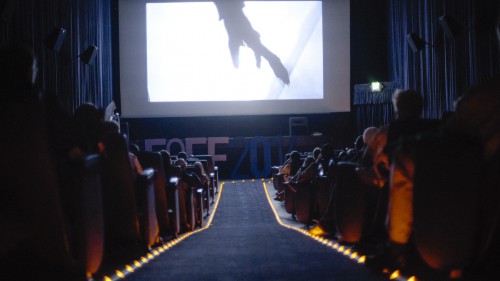 EOU’s partnership with the film festival, which runs Oct. 19 to 21 in La Grande, extends beyond a sponsorship to connect students and faculty with this annual, community-led event. Students in the Master’s of Arts in Teaching program organized the festival’s fundraiser in September as part of their service learning project, a requirement of the MAT curriculum.

Kari Koznek, of Sandy, Ore., helped coordinate a live auction at the film fest’s Sept. 20 fundraiser and plans to earn her master’s for elementary education in June.

“It’s taught me time management and organization, which are both important for a teacher,” Koznek said.

More than 50 EOU graduate students across the state are participating in service learning projects this fall. The five students working with the Eastern Oregon Film Festival (EOFF) have already gleaned valuable lessons from the experience.

“It’s a great way to work with community members in La Grande and from the wider region,” education professor Tawnya Lubbes said of EOFF. “Plus, it puts them in contact with a diverse group of people.”

Michael Rubrecht, a La Grande resident working toward a master’s for secondary education, said the festival brought him into contact with a variety of artists, volunteers and attendees. Nic Maszk, a Baker native who plans to teach high school science, added that the film festival brings people of diverse backgrounds to La Grande.

“It’s something I’ll stay involved with in the future,” Maszk said. “I’ve learned that there’s always time to help other people and trying new things is worth the effort.”

As the festival approaches, the students will continue to promote film showings, musical performances and visiting artists. A few of these writers and filmmakers will speak on campus through partnerships with EOU faculty.

“Anyone who has read Jon’s work or seen the films he has written will know the depth of characterization and how compelling the situations are that he creates for the screen,” said Ars Poetica Director David Axelrod, “He is a tremendously accomplished screenwriter.”

In addition to his short fiction and three novels, Raymond co-wrote the HBO miniseries, “Mildred Pierce,” which received five Emmy awards. Raymond will hold a screenwriting workshop from 11 a.m. to 12:30 p.m. on Oct. 20 at JaxDog Café & Books (1118 Adams Avenue).

Later that day, Mingo and Yuknavitch will present “Stage to Screen” at 4 p.m. in McKenzie Theater. Mingo will shed light on the process of bringing Chuck Palahniuk’s “Lullaby” to the screen, and Yuknavitch will discuss her award-winning novel, “The Book of Joan,” which was recently picked up for a film rendition. The pair will also explore their 17-year collaboration to bring Yuknavitch’s memoir, “The Chronology of Water,” to the screen.

Both events are free for EOU students and EOFF pass holders, but cost $10 for all others.

“We were fortunate this year that Ars Poetica was looking for a curricular tie-in to the festival,” EOFF director Christopher Jennings said. “We look forward to building our partnership with EOU to provide more cultural and educational experiences for students.”

Visit eofilmfest.com for more information about these and other festival events.