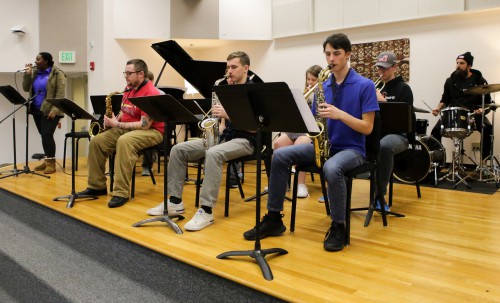 The African Drumming Ensemble, led by Luke McKern, performs traditional rhythms representing drumming cultures from around the world, and will join 45th Parallel for a modern setting of a Haitian folk tune.

The 9-piece small group, featuring horns and a rhythm section, plays tunes from the blues and jazz tradition, arranged by director Greg Johnson specifically for the band. 45th Parallel’s set this fall includes a setting of “Basin Street Blues,” featuring a transcription of an improvisation by Sidney Bechet; Horace Silver’s hard bop classic “Nica’s Dream;” an adaptation of “Sherpa,” a loose reggae tune written by Jeff Coffin for Bela Fleck and the Flecktones; and the world premiere of a new composition by John McKinnon entitled,”I Never Met a Cliche I Didn’t Like!”

The newly-formed EOU Creative Ensemble focuses on improvisational techniques, and this fall the group includes seven musicians employing voice, saxophone, trumpet, piano, guitar, bass, drums, and a guitar amplifier in various settings of Julius Eastman’s iconic early work of minimalism,”Stay On It;” the jazz standard “All the Things You Are;” a 1966 version of “Spirits Rejoice” by Albert Ayler; and a directed improvisation structured by Greg Johnson and entitled, “Cages.”

Admission to the concert is free, but donations toward music scholarships are always accepted. For more information, call Greg Johnson at 541-962-3559.