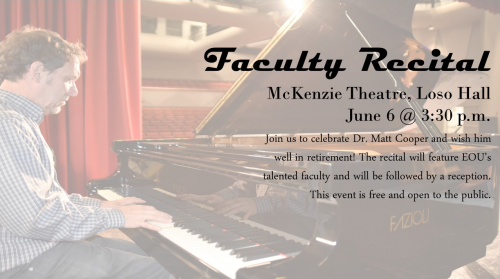 Cooper will join his colleagues on stage in McKenzie Theatre to perform a farewell faculty recital at 3:30 p.m. on June 6.

“The recital will give all of the music faculty an opportunity to perform with Matt on the new Fazioli piano he selected,” said EOU music professor Peter Wordelman, a long-time peer of Cooper’s. “The concert will feature both classical and jazz music, and reflect some of Matt’s favorite styles and composers.”

Cooper said he’ll miss “the buzz” of returning to campus in the fall, but that he’s grateful for the many connections he’s made at EOU.

“I’m feeling a mix of exhilaration, fear, and a little sadness,” he said. “I will miss the interactions with individual students, and having to meet the relentless day-to-day challenges of crafting assignments and arrangements to meet students’ needs. At the same time, I will continue many of the same activities as before: performing, teaching, presenting, adjudicating, writing–but without the pressure of teaching five to six classes each term.”

Cooper made the most of EOU grants and support to travel for research, including a trip to Russia where he learned about their system of musical education. He said the cultural connection he made there was pivotal, and allowed him to write a book on Ellington’s piano styles, which led to presenting at conferences in England and Amsterdam. A Faculty Scholars grant also funded a trip with Jill Gibian to Buenos Aires to study tango music.

“I hope I’ve imparted a sense of the work ethic and preparation that students will need to be music professionals,” he said. “Music is one of the most challenging disciplines in terms of the time it takes, both in one’s daily schedule (rehearsing, practicing, attending class and studying) and in terms of the development of one’s musicianship and skill.”

The concert is free and open to the public, and a reception in Loso Lobby will follow the performance.