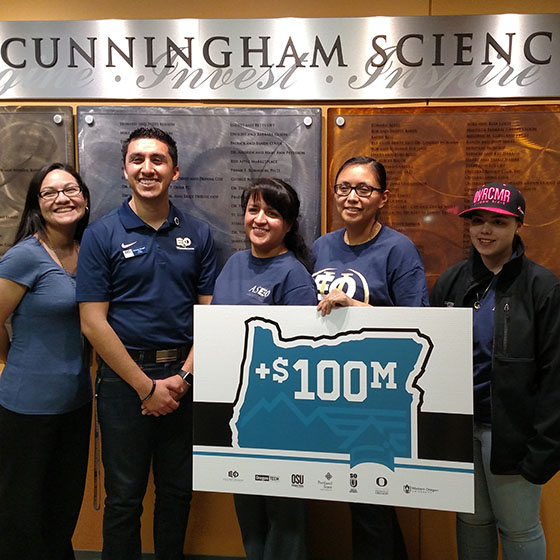 ONTARIO, Ore. March 17, 2017 – Eastern Oregon University students and staff traveled to Ontario Thursday to testify in favor of higher education funding at a hearing of the Oregon Joint Committee on Ways and Means.

“I think it’s unacceptable to see 10 percent tuition increases in Oregon, and I’ve regularly lobbied for zero percent increases at EOU,” said Johnson, owner of Sage Farms in the Treasure Valley. He is a founding member of Malheur County Poverty to Prosperity and also serves on several other business and agricultural boards.

For Rangel, lending his voice to the testimony in Ontario was important because of his experience transferring to EOU from Treasure Valley Community College in 2015.

“It reminds me that if any of these opportunities weren’t available to me, I would still be feeding cattle at 4 a.m., digging irrigation ditches and fixing barbed wire fences, working two to three jobs just to make ends meet,” Rangel told the committee. “I want to make sure that future generations have the same opportunities I have.”

McHaddad delivered remarks prepared by former ASEOU Student Government President Addie Beplate. In Beplate’s testimony, the Bend resident described how her experiences at EOU – including representing students on university committees, giving members of the Higher Education Coordinating Commission a personal campus tour and testifying in favor of higher education before the legislature – were key factors in her acceptance to the law program at the University of Oregon where she will be joining the class of 2020 this fall.

“Ms. Beplate’s story echoes the experiences of thousands of EOU alumni; experiences that are threatened by the specter of low funding,” McHaddad said. “In order to provide college educations to thousands more students at EOU and prevent a tuition increase greater than 5 percent, I ask that you fund public universities at $765 million during the next biennium.”

EOU education student and lifelong Malheur County resident Rebecca Cuevas also talked about the need for teachers in eastern Oregon.“Numbers is the name of the game, and I understand that,” Cuevas said. “I would like you to think about the following numbers I am going to give you. A typical cohort here at the EOU Ontario Center is 23 students for the teaching program. This year, my cohort is 10. Our biggest local school district emergency-certified 14 teachers, meaning we are lacking teachers at a significant amount.”

Cuevas followed her remarks by requesting that the legislature increase funding for public universities by $100 million.

The final speaker to share her story with the committee was Mirta Diaz, a Malheur County resident also studying education at EOU’s Ontario Center.

“I am a non-traditional student with two teen boys already attending high school,” Diaz explained. “It has taken me so long to come to school full-time, a lot of it having to do with financial issues. As a single mom, it has been a long road. Although I believe that there shouldn’t be any increase in our tuition, I’m here to ask you for your support for $100 million to keep tuition under 5 percent.”

« Governor’s Food Drive makes impact | “A Place for All People” »