June 5, 2012
LA GRANDE, Ore. (EOU) – Countless hours of practice and travel are paying off for Justin Jarvis and Seth Shelton as they make final preparations for their appearance at the Super Bowl of college rodeo. 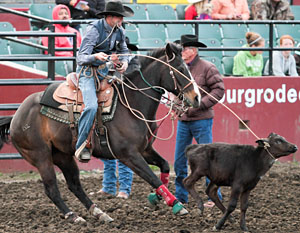 This is the first year since 2006 that EOU has had a competing NIRA team. With two of its members qualifying for nationals, everyone’s spirits are riding high.

“There is a lot of mental preparation involved,” Jarvis said. “Repetition is key to finishing the fastest.”

JoLyn Scott, the club’s adviser, and coaches Travis and Shonda Hampton and Jim Weiser, traveled with the team to almost every rodeo this season. 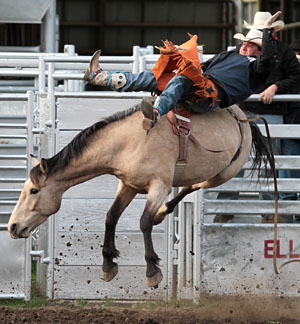 “We were on pins and needles!” Scott said, recalling that pivotal day in Hermiston where only the top three competitors from each event advanced to nationals.

“Our team really laid it all out there and this is a huge accomplishment,” Hampton said. “The national finals are like the Super Bowl for college rodeo.”

Hampton was a member of the EOU Rodeo Team when she was a student and now supports her husband Travis with his duties as coach.

“Without Shonda and JoLyn, we wouldn’t be nearly as organized as we are,” Shelton said.

EOU is currently the only four-year university in Oregon with a recognized NIRA team. There are 16 members this year and interest has been gaining momentum, with scholarships and other incentives available to participants.

Next fall, the club will host a hometown rodeo in La Grande and is seeking businesses to help sponsor the event. Funds will also assist with the cost of travel and practice stock and facilities.