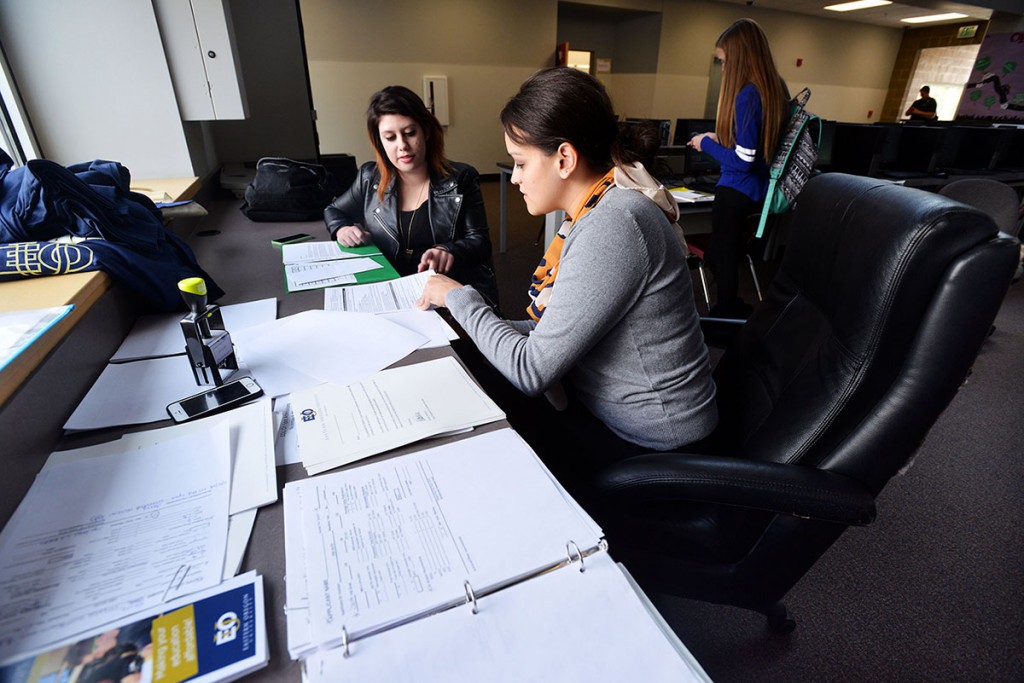 EOU looks to Umatilla County as it works to increase enrollment

Originally published June 28, 2016
Eastern Oregon University has struggled to find its footing over the past decade, but President Tom Insko said the university now has their feet beneath them and is heading in the right direction.

“I like where Eastern is positioned,” he said. “We have a lot of work ahead of us, but that’s OK.”

Two years ago, people weren’t so optimistic. The institution was struggling financially and morale was low after staff layoffs and the decision to cut several majors. Enrollment was trending downward and the university was on its sixth president in 14 years.

Today, some of those problems seem to be easing, starting with turnover in the president’s office. Insko, who just completed his first school year as EOU’s president, has promised he is in it for the long haul after leaving his job as regional manager for Boise Cascade. He does not see his alma mater as a stepping stone to a larger institution.

The university has begun adding new programs of study again, and Insko said the school’s fund balance is back up to a level the state considers acceptable.

“Financially, we’re back in good health,” he said.

Enrollment is still trending downward, however, with a five percent decrease between fall 2014 and fall 2015. And the state has asked the school to submit a comprehensive report by Dec. 1, 2017, to show it has developed “a clear institutional focus and durable niche” within the state university system.

As EOU looks to play to its strengths to increase enrollment (and, by extension, revenue), Umatilla County seems almost tailor-made to its efforts. Insko said the county factors “significantly” into EOU’s vision for the future.

The university has been working to draw more Hispanic students to its campus, particularly those who might otherwise have believed college was out of reach. Based on its high Hispanic student population, the university in 2014 chose Hermiston as one of two cities to pilot a program called Bienvenidos EOU. The program invites Hispanic students and their families to a bilingual evening of questions and answers about applying for college and financial aid.

Gina Galaviz, a bilingual Hermiston native, heads up EOU’s recruiting efforts as director of admissions. She said she tells students how EOU was a good fit for her because of its small classes, personalized connections between students and staff and comfortable distance from home. 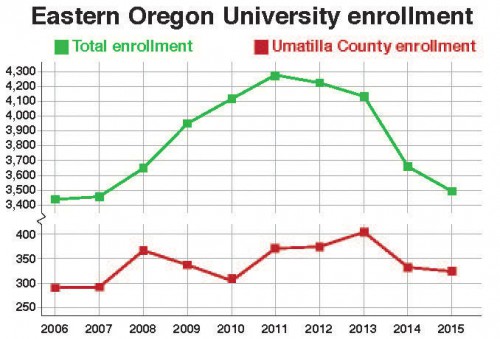 EOU’s online presence, including social media, has been amplified in the last couple of years. But Galaviz said that her office’s work to build solid connections to high school counselors around the state has been more important.

“It’s not just about the billboards, it’s about the one-on-one relationships people in Eastern Oregon seem to value,” she said.

Her connection to Hermiston helps her there, she said. Four of EOU’s directors on its board of trustees, which took over governance from the state board of higher education last year, are also from Umatilla County and have brought their personal networks to the table.

She said a lot of students in Eastern Oregon feel that going to a school so close to home will limit their horizons. So the university has worked hard to beef up its global programs, working with students to help them experience studying abroad or doing internships overseas.

“We do put a really large focus, once students get here, to have them have that global experience,” she said.

Insko also mentioned the global experience, particularly a new global food systems management program the university has added after working with agricultural producers in Umatilla County. The program, he said, was an example of EOU’s efforts to offer students majors and minors that will help them gain jobs in Eastern Oregon if they want to stay, or elsewhere if they want to leave the region.

He said the university continues to refine its marketing and a new campaign is in the works, focused on the teacher education program that EOU is best known for. Insko said the goal is to highlight not only the program’s quality, but also the number of teaching jobs readily available in the region.

“When you look at the demand relative to our graduation numbers, there’s an opportunity there,” he said. “That supply and demand is very favorable for us.”

Insko also said the addition of men’s soccer and men’s and women’s wrestling has raised the school’s profile and helped attract bright student athletes who may have gone elsewhere.

“With the women’s (wrestling) program, we’re on the leading edge with that,” Insko said.

He said through Eastern Promise, which allows high school students in the area to take classes that double as college credit, the university has formed a close partnership with area schools, including Blue Mountain Community College.

The university is working with community college counselors to give them an intimate understanding of EOU’s requirements for graduation. Sometimes students start at a community college and then get to a university only to find they didn’t take quite the right courses to align with the requirements of their major, Insko said. Now BMCC staff can help students transition seamlessly from BMCC to EOU and graduate within four years of starting their college education.

The types of programs EOU is trying often take time to work. A student who attends Bienvenidos EOU as a junior or starts BMCC with an eye toward transition to EOU won’t immediately show up in EOU’s enrollment numbers. But Insko said if people give them time, he believes the initiatives are close to bringing more students to the college.

“I’m very optimistic about the future of Eastern because there are so many opportunities with what we’re doing,” he said.
_____