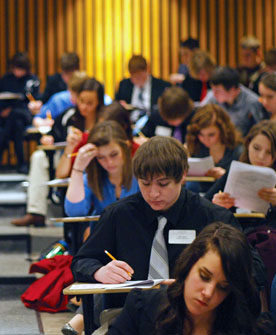 EOU photo by Andrew Murray / Competitors put their business knowledge to the test during the 2011 FBLA Conference.

Approximately 400 students from eastern Oregon high schools will participate in the competitive event. The top 10 finishers will qualify for the state FBLA conference in Portland this April.

A public awards assembly will be held from 12:45 to 3 p.m. in McKenzie Theatre in Loso Hall.  Presenting at the assembly will be Taylor Sarman, a senior at Union High School and the current FBLA National President.