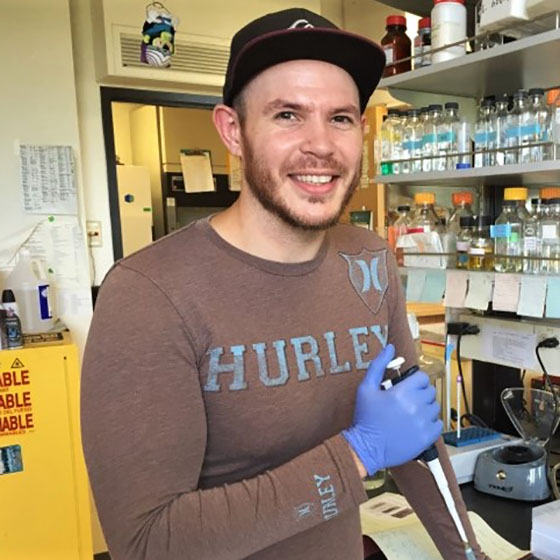 Submitted photo / Dr. Arden Perkins, a 2009 graduate of EOU’s biology program, is shown doing lab work. Perkins was behind an Oregon State University study that could lead to a breakthrough in antibiotics, particularly in the battle against bacteria and some drug-resistant diseases. His research on the subject was published in October.

By Ronald Bond, The Observer
Story originally published Sept. 13 as part of the paper’s Real People series
Arden Perkins graduated from EOU in 2009 and is currently a postdoctoral fellow at the University of Oregon Institute of Molecular Biology. Learn more about his recently published research during his public lecture, “A Cell PH2O2NE Call: Hydrogen Peroxide Has Something to Say,” at 6 p.m. Thursday, Nov. 17 in Huber Auditorium in Badgley Hall.
______________
CORVALLIS, Ore. – An alumnus of both Powder Valley High School and Eastern Oregon University is the lead author of a recent Oregon State University study that could lead to a breakthrough in antibiotics.

Dr. Arden Perkins, who graduated from Powder Valley in 2005 and EOU in 2009, spearheaded research that led to the discovery that proteins in bacteria crucial to the bacteria’s survival could be inhibited, a finding that in the long run could lead to new ways of fighting certain diseases.

Perkins’ research focused mainly on peroxiredoxin, a protein found in cells, including those within the human body.

“These proteins do have a really important job in the cell,” Perkins said. “They convert hydrogen peroxide to water.”

Hydrogen peroxide is a toxin made a couple of different ways in the human body. It is a byproduct of when cells produce energy, Perkins said. The problem with hydrogen peroxide is that if it is not converted to water, it can cause damage to DNA and to cells, including making them cancerous. Peroxiredoxins are essential, then, to cell life.

“Peroxiredoxins are sort of like waste management, so they take (hydrogen peroxide) and convert it to something harmless,” Perkins said.

Disease-causing bacteria cells also have these proteins, and they perform the same function. Where this causes an issue, Perkins explained, is that white blood cells use hydrogen peroxide to kill bacteria that enters the body. If the bacteria can convert that to water, though, it lessens the affect of the attack.

Perkins’ study focused on how to inhibit the bacteria, and he found that the proteins held the key.

“The idea is, if we could just very selectively stop the peroxiredoxins (in the bacteria) from functioning, then that would kill the bacteria,” he said. “This would remove the major defenses, so it would be really easy for our white blood cells to kill (bacteria).”

A research technique called protein crystallography allowed Perkins to get an up-close look at the structure of the proteins.

“A protein is like a machine,” he said. “Like any machine, it has moving parts. In order to perform the chemistry that converts hydrogen peroxide to water, there are some parts of the protein that have to move.”

Perkins explained that the challenge was to find out what parts of the protein needed to move in order for it to function fully.

Stop that, and the protein is permanently damaged.

“It turns out that the protein is actually irreversibly ruined when you prevent it from moving,” he said. “The cool thing is the part of the proteins that need to move are different (in) human peroxiredoxins than the ones in bacteria.”

Perkins said that if drug researchers can develop an antibiotic that would be able to target just the peroxiredoxins in bacteria, it would be a huge step in fighting drug-resistant infections, such as staph or tuberculosis.

Perkins added the same method could possibly be looked at for the treatment of other ailments, including malaria and African sleeping sickness.

“This is a way we could target drug-resistant bacteria and parasites we don’t have any treatment for at the moment,” he said.

The timetable for a viable drug, however, is 10 years or longer.

It’s quite a step for Perkins, who said he entered college at EOU unsure of what he wanted to do. He said he actually started as an art major.

“I had always had an interest in art and science, but after taking my first bio course, I was very hooked on that, so I switched my major to biology,” he said.

He graduated with a bachelor’s degree in biology and a minor in chemistry in 2009, and joined the OSU biochemistry doctrinal program in 2011.

Perkins connected with biochemistry professor Andy Karplus and spent the majority of his 3-1/2 years studying peroxiredoxins. He obtained his doctorate in biochemistry and biophysics in March 2015.

Perkins’ research was published in the research journal “Cell: Structure” in October.