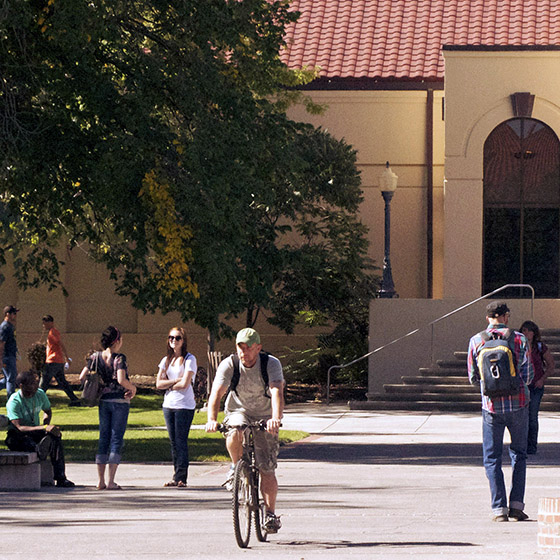 EOU file photo / A host of positive rankings, new grants, and stories of individual and institutional success unfolded for Eastern Oregon University during the past academic year.

LA GRANDE, Ore. August 10, 2016 – From affordability and economic value to accessibility and services, Eastern Oregon University received high marks across the board this past academic year.

Three independent ranking sources named EOU to their “best of” lists for online degree options in 2016.

At the graduate level, the university’s master of fine arts in creative writing program appeared in the top 10 on a list of 50 schools offering affordable online graduate degrees. Nonprofit Colleges Online issued the rankings, recognizing schools with the “Students Before Profits Award” for 2015-16.

When it comes to economic value, the reputable publication The Economist ranked EOU second among all public and private institutions in Oregon, and at number 216 out of 1,275 schools nationwide. The study shows Eastern alumni are earning on average $3,004 more than expected if they had attended another university and received the same degree.

Another national college guide named EOU to its list of 2015 Public Colleges of Distinction, and the university achieved this recognition again for the 2016-17 academic year.

To be included, schools must stand out in four areas of distinction: engaged students, great teaching, vibrant communities and successful outcomes. In addition, all of the Public Colleges of Distinction feature smaller class sizes, enlist faculty that are more attentive to individual students, and excel at getting students ready for the job market or graduate programs.

Serving veterans and active military members is another area where the university excels.

When Military Times announced its Best for Vets: Colleges 2016 rankings, EOU appeared on the list of online and nontraditional schools. EOU is also a Military Friendly® School, with the elite designation recognizing a commitment to military and veteran students and dedication of resources to ensure their success.

Likewise, the latest Military Advanced Education & Transition’s college guide provides students with information about institutions – including EOU – that go out of their way to give back to men and women in uniform.

“I am inspired by the successes the Eastern community has accomplished over the past year,” said Tom Insko, EOU president. “With every achievement noted here, there is a story of faculty, staff, students, alumni and friends working together to make a successful learning community for our students. I am looking forward to seeing EOU on more lists like these in the future.”

These and other accomplishments, including individual and institutional success stories, have been compiled in the university’s forthcoming annual financial report and appear below. The report will be available this fall at www.eou.edu/admin/financial-reports.

The National Science Foundation’s S-STEM program funds a new scholarship for EOU students majoring in biology, chemistry-biochemistry, computer science and mathematics. The award is called Advancing Science and Technology in Eastern Oregon – ASTEO for short – and it supports students intending to join industry or enroll in graduate school after finishing their undergraduate degree.

Funds from the U.S. Department of Education enable the creation of a new Student Support Services (SSS) program assisting low-income, first-generation and disabled students. EOU is selected through a highly competitive federal TRiO grant application process and approximately 160 students will be served each year of the five-year grant, with efforts channeled into their successful retention, academic achievement and graduation.

EOU receives a $25,000 grant from the OHSU Knight Cancer Institute Community Partnership Program to create a cancer prevention program for middle school youth in La Grande. Called Get Outside – After School Activity Program (GO – ASAP), it is designed to increase self-confidence and experiences around outdoor activities. Kelly Rice, assistant professor of physical activity and health, is the principal investigator for the grant.

A record 100 percent of master of arts in teaching graduates earning authorizations in middle and high school education find jobs in 2015, with schools in Washington, Idaho, Alaska, Montana and Wyoming welcoming new teachers from EOU into their classrooms. EOU’s elementary MAT program also sees strong placement rates. While the university’s geographic location provides an advantage in preparing students to teach in a rural setting, graduates are also trained to work with students in urban environments.

For the sixth year in a row, EOU’s Chemistry Club receives an Outstanding Award from the American Chemical Society at its national spring meeting in San Diego. EOU is among about 50 chapters across the nation to receive the award out of more than 1,000 chapters, and it is the only chapter in Oregon to receive the distinction.

The American Scholastic Press Association awards top scores to the student-produced Eastern Oregon Science Journal. EOU’s magazine highlighting chemistry, mathematics and psychology receives a first-place award with special merit and an additional nod for outstanding theme. The journal’s success is the result of a team effort between faculty and students. It is the first student-published, undergraduate scientific research journal in Oregon.

Math majors Travis Lowe and Sydney Nelson, with research advisor Amy Yielding, associate professor of math, work with Oregon DEQ and NOAA to improve an air quality forecasting model helping residents of Harney County breathe easier. The city of Burns uses the tool to initiate a signal flag warning system guiding home heating and open burning practices. Impacts of the team’s work are far-reaching, with the possibility of employing the model in other towns with winter air stagnation issues, including La Grande and Klamath Falls.

> Heading to the high seas

Rachel Bentz, 2016 EOU graduate, lands a position with the technical stage staff aboard Royal Caribbean Cruises and sets sail for Shanghai. The theatre major from John Day is excited to see many different locales including Japan and Thailand. Her experience as stage manager and McKenzie Theatre technician at the university, combined with resources and support from faculty, staff and EOU’s Career Services Center, helped prepare her for the job.

Dan Mielke, the innovator behind Eastern Promise, is honored with the prestigious “Edu-Preneur” award at the annual Focus on Freshmen 2015 conference in Los Angeles. The award recognizes his vision and creativity in leading thousands of students on a positive path toward academic focus and success in high school, college and beyond.

Aaron Thornburg, assistant professor of anthropology, joins a select group of peers honored by the American Anthropology Association as 2015 Leadership Fellows. Each year a group of three to five leadership fellows is paired with a mentor chosen from among AAA leadership. The program provides him a unique opportunity to learn about the association and leadership opportunities.

Ryan Dearinger, associate professor of history, delves into a dark and often-untold part of America’s past in his new book “The Filth of Progress.” Published by University of California Press, it tells the story of the workers who built the canals and railroads during the American expansion of the West from the completion of the Erie Canal in 1825 to the joining of the Central Pacific and Union Pacific railroads in 1869.

The reputable publication The Economist ranked EOU second among all public and private institutions in Oregon, and at number 216 out of 1,275 schools nationwide. The study shows Eastern alumni are earning on average $3,004 more than expected if they had attended another university and received the same degree.

Sarah Witte, longtime EOU professor and administrator, is selected for the school’s top academic post. She is the first female provost at the university. As the chief academic officer, she oversees day-to-day operations of academic and curricular programs in addition to leading strategic planning and implementation efforts.

> The economics of beer in Oregon

Jeff Dense, professor of political science, releases a new study estimating the economic impact of the 2015 Oregon Brewers Festival to be $30.2 million. He and a team of students administer 751 on-site interviews during the festival in Portland in July. Demographic factors and estimates of festival expenditures in tourism-related categories are taken into account in the study.

Wrestling makes a comeback to campus with the addition of a new women’s program and reinstatement of the men’s program beginning fall 2016. A startup fund of $300,000 from State Representative Greg Smith from the Oregon Legislature, and commitments of up to $200,000 from alumni and the Restore College Wrestling group are supporting the program.

Devin Farrand, 2009 EOU art graduate, makes The New York Times’ list of “Seven Young Artists Not to Miss at Frieze.” The Times noted Farrand’s use of juxtaposition in his work. He pulls from a variety of experiences — construction, building guitars and working on cars — often creating art out of practical materials recognizable to people across socioeconomic classes.

The EOU Foundation awards a record $550,000 in scholarships for the 2016-17 academic year.First-year students through those in graduate level programs and across disciplines are eligible for awards. The Scholarship Committee – an all-volunteer group comprised of faculty, staff and foundation trustees – matches each recipient meticulously to criteria established by the donors.