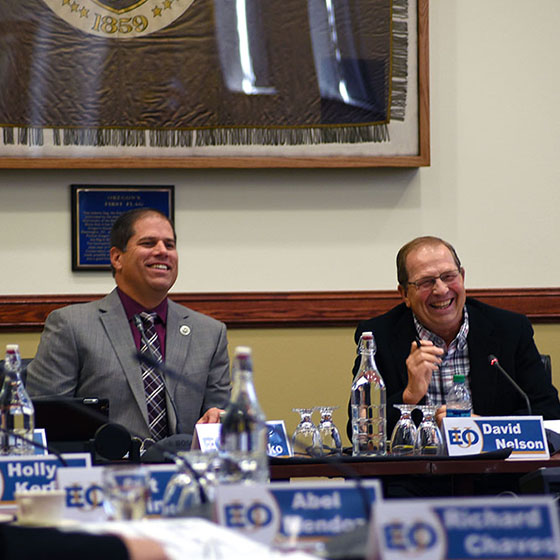 Photo by Laura Hancock / Thursday’s official meeting of the EOU Board of Trustees also marked the first time for Tom Insko, left, to participate as president of the university. The shift in governance from the State Board of Higher Education to EOU’s board and Insko’s presidency were both enacted July 1. David Nelson, board chair, is pictured at right.

LA GRANDE, Ore. (EOU) – Eastern Oregon University’s Board of Trustees convened Thursday for its first official meeting following the July 1 governance transition from the State Board of Higher Education to the new, local board.

David Nelson, board chair, opened the meeting by conveying a sense of enthusiasm and optimism for the work that lies ahead for the board.

“I feel that we’re really starting out on a very incredible journey,” Nelson said. “If you look at the old university board system that we operated under before, they [state board members] basically were all from the Willamette Valley. They might have a person from eastern or maybe southern Oregon…but with this board, we’re all from this region and very much involved with the university.”

“Many folks are graduates of EOU,” Nelson added. “I have a great interest in the success of higher education and I want Eastern Oregon University to succeed.”

In his opening comments, President Insko highlighted legislative activities since the board retreat in June and his travels visiting EOU’s regional centers and partners around the state. He said the university is exploring the possibility of creating wrestling programs for men and women, and hopes a decision will be made later this fall.

Insko also noted that the memorandum of understanding between EOU and Oregon State University’s agriculture program is being reviewed and revised to enhance the experience for students in the program attending EOU’s campus.

The motion was made and carried to approve the preliminary budget.

In other action items, Bill Johnson, a trustee from Fruitland, Idaho and owner of Sage Farms, recommended the nomination of Dr. Brad Stephens, on behalf of the Governance Committee, as a candidate for the vacant position on EOU’s board.

Stephens, an orthopedic surgeon from Joseph, is involved in numerous community organizations and is also a trustee of the EOU Foundation. The motion was made and carried, and Stephens’ nomination will be put forward to Governor Kate Brown with his official appointment anticipated in November.

“It’s going to be a privilege to be a member and I really look forward to working with you,” Stephens said. “It’s [the board] a wonderful organization, and of course, a critical thing for Eastern.”

The board then heard about a proposed academic mentorship program called “Get Focused, Stay Focused” from Dan Mielke, interim dean of the Colleges of Business and Education at EOU and director of Eastern Promise.

The program is a graduate level, 15-credit certificate that would enable participants to become trainers in the program and apply the credits toward a master’s in teaching from EOU.

“From a schools’ perspective, this program has many opportunities to mentor, set goals and provide a future focus for developing students,” said George Mendoza, a trustee and assistant superintendent and director of special education for the Morrow County School District. “I do feel this is a great opportunity for Eastern Oregon.”

Mendoza made a motion for the board to approve the new program and the motion carried.

Xavier Romano, vice president of Student Services, then provided an update on enrollment and conversion goals. Romano added that the new TRiO student support services program, which will enhance EOU’s retention efforts, is moving forward, and an announcement of the program director is expected soon.

Other items for discussion included the evaluation and appraisal of the president’s progress, questions and clarifications about EOU’s emergency response protocols and prevention measures.

A request from President Insko was also approved to award an honorary posthumous degree to Ronn Witcraft, a non-traditional student who passed away in September just prior to completing his bachelor’s in communications. Witcraft was a Navy and Air Force veteran with a passion for helping other veteran students succeed in college and in life.

Individual committees on Finance and Administration and Academic and Student Affairs also convened today following the full board meeting.

For the agenda and documents related to the board and committee meetings, and an archived live stream of the board meeting, go to www.eou.edu/governance.

The next regular public board meeting is scheduled for January 21, 2016.