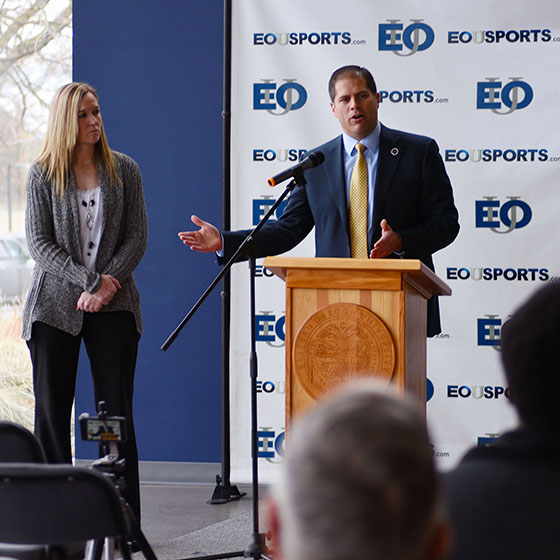 LA GRANDE, Ore. – Wrestling is officially making its way back to the campus of Eastern Oregon University, Director of Athletics Anji Weissenfluh announced at a press conference Monday afternoon.

Amidst reporters and cameras inside Quinn Coliseum, Weissenfluh announced that EOU will be adding women’s wrestling and reinstating men’s wrestling beginning in the fall of 2016.

“The addition of the programs will allow us to attract local and regional talent,” Weissenfluh said. “Eastern and central Oregon have had, and have, a rich history of success in wrestling.”

EOU received a startup fund of $300,000 from State Rep. Greg Smith from the Oregon Legislature to make it happen, and the Mountaineer athletic department will aim for 20 to 25 wrestling student-athletes by the fall of 2016.

Weissenfluh said the immediate priorities include hiring one coach to lead both programs, assembling a competitive schedule and recruiting.

“We will be competing in the NAIA and the Women’s [Collegiate] Wrestling Association as an independent,” Weissenfluh said.

Although Quinn Coliseum will be the home for EOU wrestling meets, the university is looking to pinpoint a designated practice site. Weissenfluh ensured that the department has “multiple” options for a practice facility and that it is in the final stages of narrowing it down.

In addition to the $300,000 startup fund, EOU President Tom Insko stated that the university received commitments of up to $200,000 from alumni and the Restore College Wrestling group in support of the program.

Insko said adding men’s and women’s wrestling would not only help enrollment, but also improve the energy on campus.

“I’m extremely excited about the energy that this program will bring and the opportunity to reconnect with alumni that we’ve lost connection with,” Insko said.

Both Insko and Weissenfluh are hopeful that EOU will become a hub for high schoolers originating from successful wrestling programs in the area, such as Hermiston and Culver, which have combined for eight state championships since 2007.

“It opens up that we can be a part of the conversation,” Weissenfluh said. “When these students are exploring their opportunities of where they want to further their education and their athletic careers, EOU is now a viable option.”

Insko also commented that EOU would be the only women’s wrestling program in the inland northwest.

The Mountaineer men’s wrestling team notched three NAIA individual championships in 1967, 1969 and 1974. As a team, EOU mustered four top-10 finishes in 1967-69 and 1971. Perhaps the most decorated wrestler in EOU history, Hall of Famer Rollin Schimmel, registered an individual title in 1967 after taking home runner-up honors in 1964 and 1966. He compiled an overall record of 94-9-1 as a Mountaineer.

“We as a university and as an athletic department are really looking forward to the addition of men’s and women’s wrestling and what it will bring to our campus, our community and our region,” Weissenfluh concluded.