May 23, 2013
LA GRANDE, Ore. (EOU) – The Eastern Oregon University Jazz and Percussion ensembles, Women’s and Chamber choirs will perform end-of-year concerts May 28, 30 and 31.

The program features combined performances of two standards, “Fly Me to the Moon” and “All of Me.” In addition, the Jazz Ensemble will perform instrumental repertoire associated with the bands of Miles Davis, Wayne Shorter, Benny Goodman, Duke Ellington, Herbie Hancock and the Modern Jazz Quartet.

The Jazz Ensemble is directed by Matt Cooper, professor of music, and the Women’s Choir by Mike Frasier, music instructor.

Admission is free with donations accepted at the door to benefit musical activities at EOU. For more information, call Cooper at 541-962-3559.
_____ 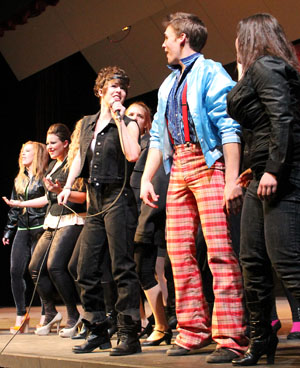 The university’s Chamber and Women’s choirs will perform at 7:30 p.m. Thursday in McKenzie Theatre in Loso Hall.

Sponsored by Koza Family Dental, P.C., the concert features many singers who are seniors in what will be their last performance before graduating.

The 30-member Women’s Choir, founded by Frasier in 2005, will begin the program with two jazz pieces, “All Of Me” and “Fly Me To The Moon,” accompanied by the EOU Jazz ensemble.

The Women’s Choir will also perform “Gate, Gate,” a setting of a Buddhist mantra with piano accompaniment by Mio Aoike, music resource faculty member, and “Koowu,” a song that uses the Palestinian word for strength as the basis for its text.

The 46-member Chamber Choir, under the leadership of Peter Wordelman, professor of music, has distinguished itself over the years as a leader in the programming and performance of creative and multicultural choral literature. Their selections will include the contemporary pieces “Sleep” by Eric Whitacre and “No Time” arranged by Susan Brumfield, along with multicultural pieces “Dance of Zalongo,” “Zikr” and “Balleilaikka” which represent the cultures of Greece, Pakistan and India.

The program also features a combined performance of “Lamentations of Jeremiah” conducted by EOU graduate Jonathan Davidson, who recently received an assistantship in conducting at the University of New Mexico.

For a change of pace, the men of the Chamber Choir will be highlighted for two numbers, “Prayer of the Children” and the Barbershop harmony inspired “Fat Bottomed Girls.”

The women of the Chamber Choir will also join forces with the Women’s Choir on Z. Randall Stroope’s setting of “Psalm 23,” accompanied by Aoike on piano, and students Caite Debevec on flute and Danny Bailey on oboe. The women will also be featured on a Sweet Adelines’ medley, “Diamonds.”

Admission to the concert is free with donations for the choral program accepted at the door. For more information contact Wordelman at 541-962-3352.
_____ 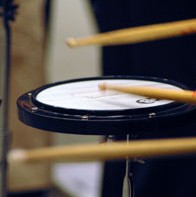 Concluding the week of concerts is a performance from EOU’s Percussion Ensemble at 7:30 p.m. Friday in McKenzie Theatre in Loso Hall.

Teun Fetz, associate professor of music, is the director of the ensemble featuring eight students playing dozens of percussion instruments.

The group will present pieces in a variety of styles from large ensemble works to trios, including some by Japanese composer Yosuke Nomoto. Familiar works include three classical pieces arranged for marimba: “Fugue in G Minor” by J.S. Bach, “Pizzicato Polka” by Johann Strauss, and “Danza Del Fuego” by Manuel deFalla. An arrangement of “Amazing Grace” by Lou De Lise complete their repertoire.

“This ensemble will bring intensity, precision and rhythmic drive to the music,” Fetz said.

As with the other events, admission is free with donations accepted at the door to benefit the program.