The opening is set for Oct. 3 and coincides with La Grande’s First Friday Art Walk. There will be a reception from 6-8 that evening in the gallery in Loso Hall.

“Both Clark and Kelly create delicate, meticulously crafted and engaging abstract works,” said Cory Peeke, Nightingale Gallery director. “Visitors will be treated to an exhibition of compelling objects and images that encourage both close examination and contemplation. The Nightingale Gallery is pleased to bring the larger body of work of these two exciting artists to the attention of the eastern Oregon community.”

Clark’s abstract forms create volume utilizing the singular linear element of fine steel wire. Her sculptures also often employ other materials such as paper to create shapes reminiscent of many organic forms, yet remain unrecognizable. Her unique hanging forms inspire curiosity and encourage viewers to find meaning within their free association with the objects.

Clark received her BFA from the University of Washington and her MFA from Rochester Institute of Technology. She is currently a professor and head of the metals department at Oregon College of Art and Craft. She has had numerous solo and group exhibitions regionally and nationally, and was recently awarded a three-month John Michael Kohler Arts and Industry residency at the Kohler factory in Wisconsin. 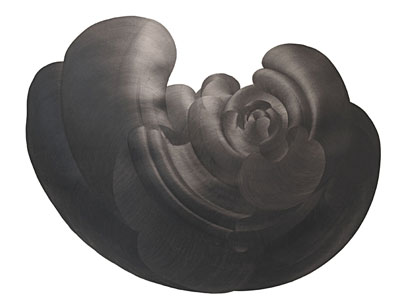 Kelly’s work uses a repetitive and laborious drawing process to create images that serve as an observable record of passing time. His biomorphic shapes are created by tracing contours and overlaying lines with pencil. The images emerge from areas that reflect and absorb light. This light glimmers and shifts along the lines of graphite creating spatial illusions and gestural movement. The works become reflecting pools of contemplation for the viewer.

Kelly received his MFA in 2005 from The George Washington University in Washington, D.C., and has been exhibiting in Portland, Seattle and New York. His work is included in the collections of the Museum of Modern Art Library and the Bieneke Rare Book and Manuscript Library at Yale University.

Both Clark and Kelly have been commissioned through the Oregon Arts Commission Percent for Art program to create work for EOU’s recently renovated Pierce Library. Two of Kelly’s drawings were installed in the spring and Clark’s large sculptural installation will be placed in early 2015.

In conjunction with the exhibition, Kelly will talk about his work at 6 p.m. Thursday, Oct. 2 in Huber Auditorium in Badgley Hall. The presentation is free and open to the public.

Clark will give a talk in the spring when she returns to campus to install her site-specific work for Pierce Library.