Professor travels to Jordan with USAID

LA GRANDE, Ore. (EOU) – When Colleen Johnson set out in August with a team from the U.S. Agency for International Development (USAID), she wasn’t sure what to expect.

What she did know was that she’d be joining former La Grande city manager Wes Hare in talking about economic development, and that the Hashemite Kingdom of Jordan was their destination.

Johnson, an Eastern Oregon University economics professor, was invited to participate in the Local Economic Development (LED) component of a project launched by USAID in Jordan. The program is intended to assist small businesses, create job opportunities and increase local development capacity in three of the country’s underserved municipalities.

Economic development initiatives completed during Johnson’s dual role as mayor of La Grande from 1999-2010 are what landed her on the team. Specifically, she was asked to talk about the combined Cook Memorial Library/ODS complex, and Business and Technology Park.

From what Johnson had to share, she gained as much in return and plans to use what she learned to enrich the curriculum of the classes she teaches online from her home in Portland.

“I teach economics, public policy and public administration, so acquiring a better understanding of how other countries are organized economically and politically provides examples for all three areas,” Johnson explained.

Personally, Johnson said she returned with an increased awareness of how much is taken for granted in the U.S., particularly local control, autonomy, democracy – even water as a natural resource. 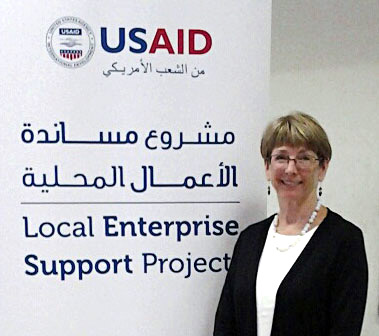 Johnson at the USAID workshop.

For instance, Johnson and the members of her group were warned not to drink from the tap and relied instead on the bottled water provided at restaurants, hotels and meetings. She subsequently began noticing empty plastic bottles littering the roads, vacant lots and national monuments.

“I was a little reluctant to head off to the Middle East, given all of the upheaval in that part of the world, but I was also curious,” Johnson recounted. “The country, the people, the customs…the whole experience was intriguing, if a bit disquieting.”

Her husband Jeff Johnson, a philosophy professor at EOU, accompanied her on the journey. They took some time to see the sights at Petra, the Dead Sea, Mount Nebo and Jerash, which were “truly spectacular,” Johnson said.

“It was an amazing and unforgettable trip.”