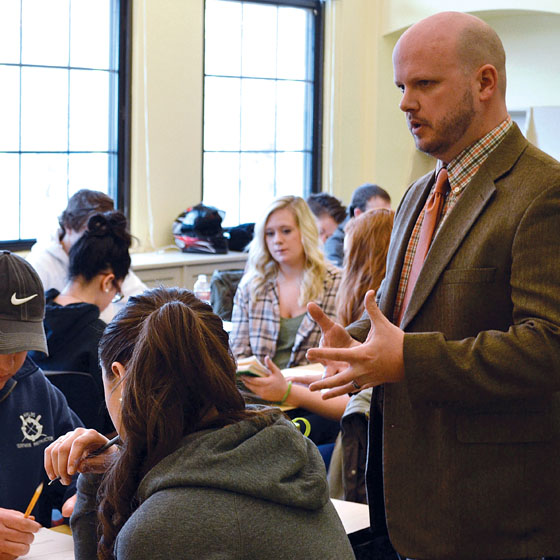 EOU photo by Dillon Starr / Scott McConnell, assistant professor of economics, teaches the class that participated in a live webinar about the Federal Reserve System.

LA GRANDE, Ore. (EOU) – Economics students at EOU joined their peers from around the country in learning more about the Federal Reserve System during a live webinar last month with Esther George, president and chief executive officer of the Federal Reserve Bank of Kansas City.

Scott McConnell, assistant professor of economics, teaches the class that participated in the event. It tied directly to their study of money, financial markets and institutions and was an effort by George to reach out to students in higher education to be more involved in their financial world and highlight employment opportunities within the Federal Reserve System.

Questions were invited and the moderator selected one submitted by EOU senior Evan Bryan.

“Eastern Oregon University was mentioned as the question was read, which was exciting for the students in the class watching it live,” McConnell said. “President George said it was an ‘excellent question’ and provided a detailed response.”

Bryan’s query was this: “The derivatives market played a significant role in generating the financial crisis of 2008. What is the Fed doing to ensure that this market receives the oversight necessary so that this market is not as dangerous to the economy?”

Bryan is majoring in philosophy, politics and economics and also minoring in economics, so the experience was particularly relevant for him.

“It was a terrific experience to have the opportunity to ask President George a question about an important issue impacting the U.S. financial system,” Bryan said. “This is one of the highlights of EOU’s small class sizes, which give students the opportunity to actively participate in class discussions with professors and guest speakers.”

McConnell said the event also helped his students feel more connected to their financial world and opened their eyes to new career paths they might not have considered before.

To learn more about the economics degree program at EOU, visit www.eou.edu/economics.