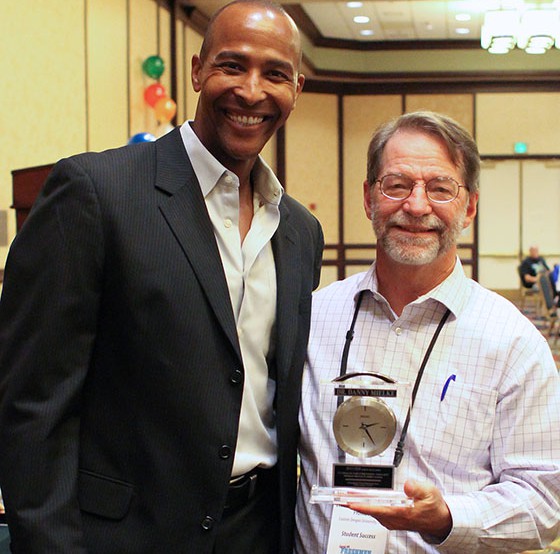 LA GRANDE, Ore. – Dan Mielke, the innovator behind Eastern Promise, one of the nation’s most successful academic collaborations, was honored with the prestigious “Edu-Preneur” award at the annual Focus on Freshmen 2015 conference held July 19-21 in Los Angeles, Calif.

Academic Innovations, Inc. recognized Mielke for his innovation, vision and creativity in leading thousands of students on a positive path toward academic focus and success in high school, college and beyond.

“Dan Mielke exudes passion, drive and determination, all qualities that he helps instill in students on a daily basis,” said Mindy Bingham, founder and president of Academic Innovations. “His entrepreneurial spirit has transformed the lives of students, families and teachers in immeasurable ways.”

Through a series of innovative programs, Eastern Promise sets out to increase the number of eastern Oregon high school students who attend college or seek post-secondary training to pursue employment in the real world by enabling them to participate in college-level courses and earn credits while in high school.

Eastern Promise uses a program called Success 101, which requires students to earn college credits as they begin to develop a 10-year plan for success, beginning in their ninth grade of high school. It’s a program that’s part of the Get Focused…Stay Focused!™ Initiative that has been successful all over the nation, as part of a collaboration among colleges and high schools.

Eastern Promise is different from other accelerated learning programs in that it is backed with a robust curriculum where teachers and administrators participate with their peers in Professional Learning Communities, or PLCs.

“I am honored to receive this tremendous recognition from my peers,” Mielke said. “We at Eastern Promise strive to provide students the tools to believe in themselves and learn the skills they need to be successful in college and the modern workplace.”

To learn more about the program contact Mielke at dmielke@eou.edu or visit eastern-promise.org.