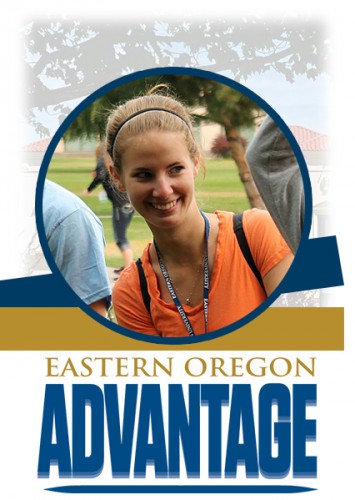 Resident freshmen enrolling on campus for fall 2015 are eligible to participate in new program.

LA GRANDE, Ore. (EOU) – A pilot program being launched by Eastern Oregon University next fall will give new students the opportunity to gain an upper hand in their college strategy.

The program is called Eastern Oregon Advantage and offers a multitude of benefits, including on time graduation, fixed tuition rates, priority financial planning and career services support. This specific combination of advantages is what makes the program distinctive, stacking the deck in students’ favor.

Jay Kenton, EOU’s interim president, is the driving force behind the new initiative.

“We’ve found that students want the ability to plan for their education,” Kenton explained, “and by graduating in four years, they can be in the marketplace for employment sooner than most schools that require five or six years to finish.”

Any new student from Oregon, Idaho or Washington who applies as a freshman and enrolls on EOU’s main campus for fall 2015 is eligible to participate.

Eastern Advantage students will pay slightly more for tuition initially, and their rate is then locked in to avoid any tuition increases implemented during their four years at the university.

Students who know what major they want to pursue when they enroll have the most to gain. EOU will work with them to make sure the courses required for their degrees are available when they need them.

Priority financial aid assistance means participants will receive individualized planning sessions on financing their education. The promise of a degree in hand after four years equals faster access to the job market, so the career services aspect ramps up when students become seniors. They’ll receive help with everything from conducting job searches and honing interview skills, to creating resumes and preparing portfolios, to filling out graduate school applications.

Another key point of the program is that students enroll and graduate as cohorts, which can forge stronger connections and result in increased retention as they work together toward graduation.

Maintaining an acceptable grade point average, taking the necessary number of credits each term and following the university’s continuous enrollment policy are stipulations of the program. Summer term may be utilized as an opportunity to make up any missed credits.

EOU will also ask students to sign an agreement promising they will give back to the school after they graduate. Alumni can either donate to a scholarship fund to support future students, or contribute their time by assisting the alumni offices with recruitment activities.

“I’m not aware of any other schools that are doing this,” Kenton explained. “There are similar programs out there, but we’re including financial aid and job placement services in addition to guaranteeing students will graduate in four years.”

For more information visit eou.edu/advantage or call the Admissions Office at 800-452-8639.