Earning a master’s degree in Mexico 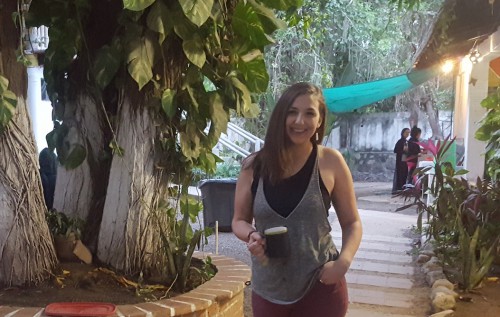 Feb. 14, 2017 La Grande, Ore. — Classrooms across the state are led by alumni of Eastern Oregon University, and many of those teachers remain students themselves long after earning a bachelor’s degree.

Recent changes to the MAT program at EOU have accelerated her achievements. Kristin Johnson, an advisor for the program, said more efficient degree attainment and more flexible course schedule have benefitted students who live at a distance from La Grande.

Johnson said the program takes about 10 months to complete, and incorporates a variety of technologies.

“Faculty are exploring new uses of social technology outside the traditional modalities of Canvas and Google Hangout to stay connected with their students, even though they don’t see them nearly as frequently,” Johnson said.

Tools such as Zoom, Slack, Flipgrid and others have entered the realm of hybrid online-campus education. Koznek has relied on these tools, particularly during winter term, as she took the opportunity to spend five months teaching in Sayulita, Mexico.

“When I realized placement was for five months, I initially wrote it off because it seemed unreasonable to be away from home for so long,” she said. “But then I realized that I probably wouldn’t get another opportunity like this in my life.”

Koznek student-teaches in second- and third-grade classrooms in a dual language program, where students learn in both Spanish and English.

“My mentor teacher and I switch between the two classrooms, so the students receive instruction in English every other day,” she said.

The program, which partners with an international school, is in its first year at EOU. Koznek is joined in Sayulita by Karyn Gomez, former director of educator preparation at EOU, who’s taking a leave of absence to teach sixth grade there this year.

Gomez was instrumental in developing the partnership, and hopes to see it grow in the future. Koznek is the only EOU student participating this winter and spring, but two others completed a three week practicum at the school during fall term.

“It’s difficult being away from my support system back home, and, with the amount of coursework I have from the MAT program, I rarely have opportunities to explore the town and surrounding area, which is frustrating,” she said. “But the students here are amazing and come from so many different backgrounds. I have been picking up Spanish, slowly but surely. It helps practicing with native Spanish speakers that are learning English because we can practice together and there’s no pressure to be perfect.”

Koznek keeps in touch with advisors and faculty at EOU via Zoom and checks in with Gomez daily. Changes to the program, including a shift from 13 months/five terms to 10 months/four terms and moving the bulk of coursework online, allow greater flexibility for students like Koznek to incorporate additional experiences.

“We are hoping that we can reach a wider range of students across the state with the new modality,” Johnson said.

Koznek plans to apply for teaching positions in the La Grande School District and hopes to continue working with international schools throughout her career.

“This is an experience like no other,” she said. “The school here is incredible and there is so much to learn. However, it’s important to stay flexible, nonjudgmental and independent. Five months is a long time to be away from home, but it I believe it will be totally worth it in the end.”

Learn more about the MAT program and other paths to a teaching career at eou.edu/education.

« Launching the next generation of teachers | The edge of mathematics »